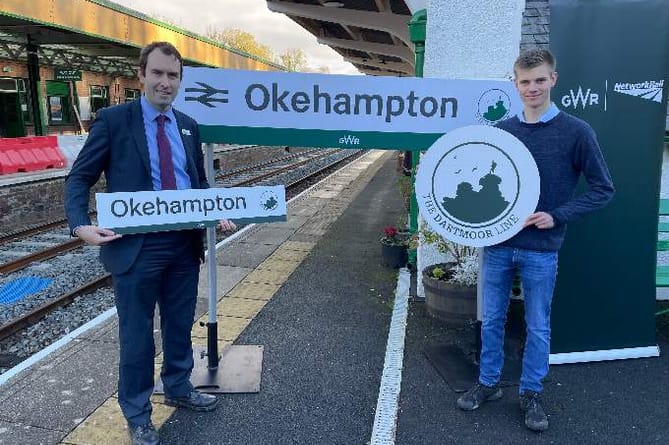 An Okehampton teenager has won a nationwide competition to create a logo for the new Dartmoor railway line.

Tom Watts, a 16-year-old student from Okehampton, saw the competition advertised through social media when he was a student at Okehampton College. The competition was suggested by Rob Thomas, communications manager for Great Western Railway, who wished to see a logo which would identify the Dartmoor Line and tell a story.

Tom beat nearly 100 other entrants of all ages nationwide, including professional designers, to create the winning design — imagined around participating in the Ten Tors Challenge. He now attends the Exeter Mathematics School for sixth form.

At a special event to unveil the new sign and logo at Okehampton Station on Tuesday, Tom said: ‘It’s brilliant, it feels really cool to see it for the first time. I live right by the moors and the train station and I’ll be coming into school on the Dartmoor Line every day so it’s going to make things a lot easier.’

After more than a decade of campaigning for the line’s return, the service between Okehampton and Exeter St Davids will run from November 20 for the first time in nearly 50 years. Tickets are already on sale.

The Dartmoor line is the first in the UK to be reopened under the Government’s Restore Your Railway scheme (at a cost of £40 million) and will provide greater access to nearby towns and villages such as Tavistock, Launceston and Bude. The work has been a successful collaboration between the Department for Transport, Network Rail, Great Western Railway, Devon & Cornwall Rail Partnership, local campaigners and MPs.

Matt Barnes, head of strategic service development for GWR, said: ‘The image is actually a sketch of Tom on Staple Tor. There’s a fantastic local story behind this great logo to mark the reopening a week on Saturday. We are absolutely delighted to have Tom’s submission and we’d like to thank him for his efforts.’

Michael Parker-Bray from Devon & Cornwall Rail Partnership said: ‘This is a fantastic step along the journey to reopening the line and so fitting that the design has come from a member of the community. We’ve worked so hard to bring this line back and we’re so keen to strengthen the bond between the new generation and their new railway service.’