Forty miles for a Falklands milestone 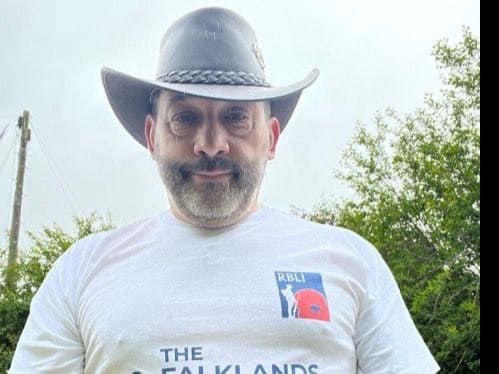 Okehampton RBL chairman Darren Kelly will be walking forty miles during May in memory of the 40th anniversary of the Falklands War. (Darren Kelly )

The chairman of Okehampton’s Royal British Legion (RBL) branch is walking 40 miles this month to raise money in support of Falklands War veterans.

Darren Kelly is taking part in the Falklands Forty virtual challenge, which encourages participants to walk, run, cycle or swim 40 miles during May to mark the 40th anniversary of the Falklands War.

Mr Kelly said: ‘I’m the chairman of the Okehampton branch so I wanted to do something and raise a little bit of awareness. It would be nice to get some support.

‘I don’t know whether I’m going to do the 40 miles all in one go or spread it out yet.

‘I’m normally doing about four to five miles a day, but I did ten miles the other day. I did it in five hours.’

Mr Kelly said he is aiming to raise at least £150 for the veterans through his efforts.

Though he did not serve in the war himself, he said remembered the day that the war was declared when he was 12 years old.

‘I went to school one day and by the time I left that afternoon we were at war,’ he said.

Okehampton’s RBL branch is also planning to hold a Falklands War memorial event at the church, although the date has not yet been confirmed.

The Royal British Legion Industries (RBLI) set up the Falklands Forty challenge to honour the lives lost during the war and support the veterans who have returned to take up a civilian life and their dependents.

More than 1,000 people around the country have already signed up to take part in the challenge and so far have raised nearly £70,000 for the charity.

The RBLI will use the money to continue to help struggling Falklands War veterans and their families by offering welfare, housing, community and job-hunting support.

The RBL will also be holding a national memorial event at the National Memorial Arboretum in Staffordshire this June.

Organisers have also arranged for the commemorative event to be broadcast on a large screen for anyone unable to attend.

More than 250 British military personnel lost their lives during the 74-day war in 1982, which started when Argentinian forces invaded the Falkland Islands. At the time, it was one of the largest conflicts involving British forces since the Second World War