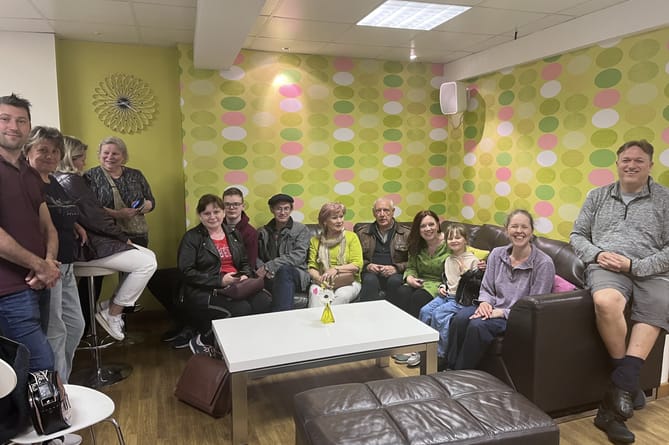 Okehampton residents have clubbed together to set up a support group for Ukrainian refugees and hosts which met for the first time last Thursday (May 12).

Okehampton Town Councillor Greta Button started the group when she realised that many other towns were setting up such support networks and Okehampton had yet to do the same.

She said: ‘I knew that other places had support groups offering help with things like accommodation but realised that Okehampton did not have a way for hosts and refugees to meet up and chat so this is where this group has come from.’

The group is offering a wide range of support to refugees including English lessons, practical advice on topics such as finding jobs or registering their children at schools, and providing church services in Ukrainian at the New Life Church led by David Cook.

The group is also planning to support British host families by offering Russian lessons to allow them to communicate better with their guests, many of whom also speak Russian.

Currently there are at least a dozen refugees living in Okehampton and Cllr Button said she expects that the number will continue to grow as more Ukrainians leave the country and move westwards.

‘I think the number will continue to grow. Most of the refugees have gone to Poland but Poland can only take so many so refugees will start to come further west.’ she said.

Svizhana is just one such refugee who made her way to Britain after fleeing from her town located in the centre of Ukraine.

She said she made the journey of over 1,000 miles by train as she was concerned that her son, who is severely autistic, would not cope on a plane.

‘We got the train to Britain. My son likes trains and buses but I was not sure if he would like flying,’ she said.

‘I wanted to come to Britain mostly because I like Oscar Wilde, Robert Burns and Gordon Ramsey and they’re all British.

‘We left Ukraine and went to Germany but I only remember about three words in German. We were also told that there would not be a suitable school for my son so we went on Facebook and started looking for another place.’

Svizhana eventually got in contact with Okehampton resident Sharon Wells-King who offered them a place in her home.

Ms Wells-King said that she felt like she was ‘fulfilling a purpose’ by taking in the mother and son, who only arrived in the UK about two weeks ago.

But though Svizhana and her son are now safe, Svizhana remains worried about her father who has refused to leave Ukraine and has told her of continued bombing in the city by Russian forces.

She said that, with the continued bombing, she is concerned that if the oil plants in the city are hit it will cause a major ecological crisis.

It is hoped that the support group will become a weekly event on a Thursday evening and group organisers are also planning on creating a booklet to provide hosts and refugees with information on the help and opportunities available to them.