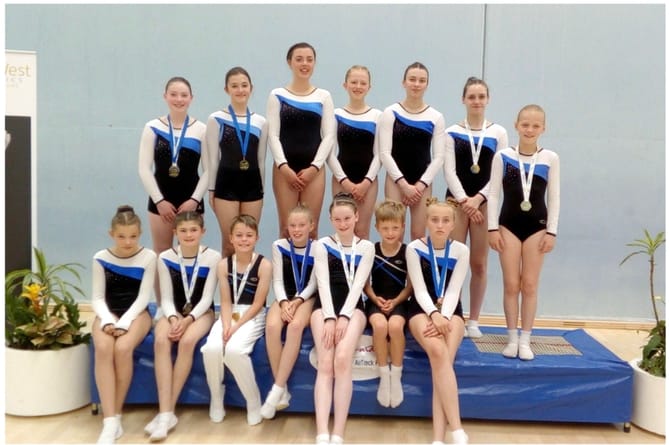 The news follows the club’s success at the regional trampoline and double mini trampoline (DMT) competition at the beginning of June at which many of the gymnasts received gold and silver medals.

Head coach, Vicki Pritchard said: ‘For many of our gymnasts it was their first competition, so we’re really proud of what they’ve achieved and the team spirit they showed at the event.

‘Thank you to the coaches, judges and parents from the club who volunteered for the day to make the competition a brilliant experience for the gymnasts.’

In the competition, Okehampton’s trampoliners won a total of 18 medals comprising of 12 gold medals, four silver medals and two bronze medals across both individual and team trampoling and DMT categories.

Trampoline competitors had to perform two ten-move routines in front of a panel of judges and were marked on their form, travel, height and difficulty.

The DMT competition, which requires gymnasts to perform two moves on a small trampoline before dismounting, were judged on their form and landings.

The club has also had other recent successes with Okehampton Flyer Mason Parker-Groves qualifying for the British Gymnastics National Age Group Final for which only the top 80 per cent of entrants qualify.

The final is set to take place at the end of June.

Since the club was set up in 2017, it has had a string of successes including one International Gymnastics Federation (FIG) bronze medal, 18 national level medals including 10 gold, more than 50 South West medals and 22 schools medals.

Vicki Pritchard has a distinguished career herself being an ex-national trampolinist, who trained at two clubs that developed beginners to FIG world champions and medallists in trampoline and her current mentor for trampoline is the coach of Olympic trampoline medallist and world champion Bryony Page.

Okehampton Flyers is a not-for-profit community club that runs sessions seven days a week for recreational and competitive trampoline, DMT and tumbling for three to 18 year olds.

The club’s other funders include Okehampton United Charities, Sport England, the Rotary Club of Okehampton, the Inner Wheel of Okehampton and Dunheved Lodge.

The club has been setting up additional sessions for beginners and competitive squads.