Potholes filled in outside All Saints Church 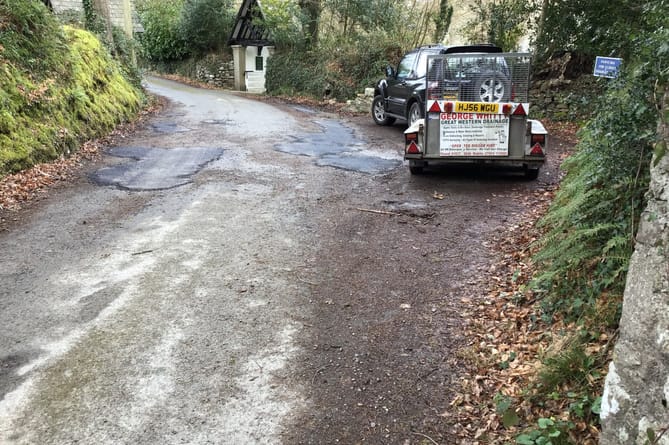 Potholes have been filled in outside All Saints Church, Okehampton (Submitted )

A TEMPORARY solution has been found to the problem of crater-like potholes outside All Saints Parish Church in Okehampton, which have been filled in by a local contractor.

The work has been carried out with funding from the church and town council and hot tarmac provided by highways authority Devon County Council.

Tony Wood, from the Parochial Church Council, said he had written to the chairman of Devon County Council asking for a more permanent solution to be found.

In the meantime, the repair will make the road more acceptable for funeral processions to arrive at the church, where the the state of the road has been described as ‘undignified’.

Mr Wood said: ‘George Whitty was the man responsible for the job which was paid for jointly by Okehampton Parochial Church Council, Okehampton Town Council and Devon Highways.

‘The PCC received several generous donations towards the work. The responsibility should lie with Devon County Highways but they only designate [this road] as a bridleway. A bridleway has to be safe for pedestrians and cyclists but not cars. So they provided the hot tarmac as their contribution. It really should be designated as a highway as it is a multi-use road leading to the public cemetery, the church and a private dwelling.

He added: ‘Our local county councillor, Lois Samuel, is following this up and I have written to the chairman of the county council to argue the case.

‘The last time it was surfaced with tarmac, a full surface, was in the 1990s when Devon County Highways paid for it all.’

The stalemate came to a head earlier this year when a local undertaker spoke out, describing how his hearse had to swerve to dodge the potholes. The ownership of the road remains a mystery, lost in the mists of time.