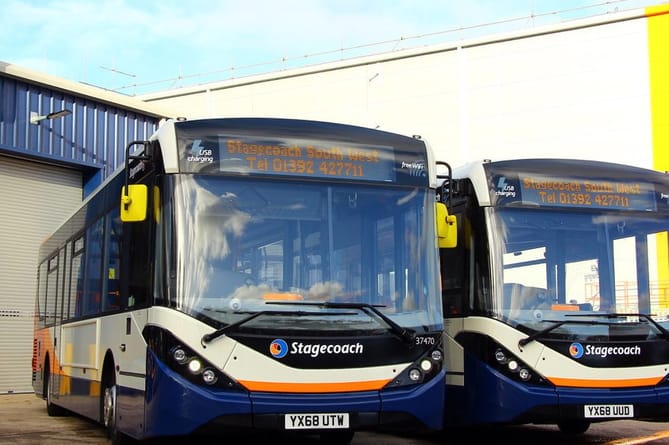 DEVON will receive £14 million towards bus improvements – less than half the amount the county council originally bid for.

A £34 million bus improvement plan, described as ‘ambitious’, was submitted at the end of October. It aimed to make buses cheaper to use, greener, more frequent, and more reliable.

Developed in partnership with Devon’s bus companies, the plan included regional zone tickets to simplify fares in collaboration with neighbouring councils and to bring in ‘young person’ tickets for 16 to 18 -year-olds, an age group most heavily reliant on buses.

However, the £3 billion of government funding available for the ‘bus back better’ programme was then slashed by more than half, with the long-awaited grants being announced by the Department for Transport this week.

While the county council got less than it asked for, Plymouth and Torbay’s bids were snubbed altogether, despite neighbouring Cornwall being chosen as a pilot area with fares to be “slashed” by as much as 40 per cent, thanks to an extra £23.5 million for the county.

A Devon County Council spokesperson said: ‘We are yet to receive confirmation of this funding settlement from the Department for Transport, so unfortunately we do not have details of whether the money is being awarded for improved services, fares, or bus priority.

‘Until we do, we cannot comment further at this stage on what it will mean for our local bus services.’

The new funding comes at a turbulent time for Devon’s bus services, which have been disrupted recently mainly because of a shortage of drivers, which has led to cancellations and reduced timetables.

Councillor Rob Hannaford, leader of the Labour group who will ask for further updates at next week’s cabinet meeting, said in response to the funding announcement: ‘It’s very good news that Devon has received this substantial funding award, particularly as last week it was rumoured that we had not been successful at all.

‘However, it is still less than half of the original bid, and Devon is a very big county, and there is a desperate need to invest in and improve our failing bus service.’

‘The original bid was a detailed costed initiative, to roll out greener, cheaper environmentally friendly buses, in tandem with more regular services in rural areas to help with connectivity, and drastically reduce commuter car journeys and pollution.’

‘We will now have to see how far this funding can be stretched in a strategic way across Devon, that has a real impact, which may well mean prioritising some areas of the county, over others, which could mean some hard choices.’

‘I mean, when you say we bid for £30+ million that was for £30+ million a year, not just a one-off. It’s all very well putting on new buses, but next year they’ll have to go because we don’t have the money, so it’s by no means a solution whatsoever.’

He said hourly buses into villages were ‘never going to come back, so we’ve got up with better ways of doing it with the information technology now that’s available’.

‘We’ve got to start investing in ring-and-ride, as one example [and] a lot more community buses. Those are the sorts of ways I think – very bespoke individual solutions for individual areas.;

Transport secretary Grant Shapps said of the 31 regions across the country, including Devon, that are getting the cash: ‘Buses are the most popular way of getting around in this country, but for too long people outside of London have had a raw deal.

‘The investment we’re making to ramp up the bus revolution will drive down fares at a time when people’s finances are tight and help connect communities across England.’