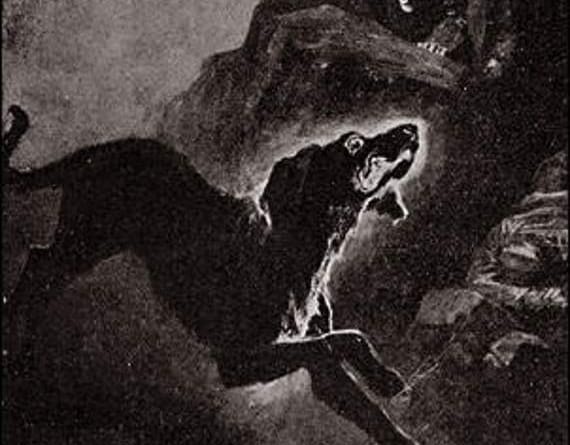 Lindsay Turpin retraces the steps taken by Sherlock Holmes author Arthur Conan Doyle as he penned his most famous work.

DARTMOOR has been the inspiration for many novels — none more so than Sir Arthur Conan Doyle’s The Hound of the Baskervilles which still enthralls readers to this day.

Conan Doyle, born in 1859, was a Scottish writer and physician and famous for creating the fictional detective Sherlock Holmes.

The third of the crime novels by Conan Doyle, featuring Detective Holmes, is the world renowned Hound of the Baskervilles, published in 1902.

It follows a suspected murder inspired by the legend of a fearsome hound of supernatural origin, which is investigated by Holmes and his companion Dr Watson. The book contains reference to many actual place names on Dartmoor, especially Princetown and surrounding villages.

In 1901, Conan Doyle stayed at the Old Duchy Hotel, now the National Park Visitor Centre in Princetown. Whilst there, he was inspired to write this crime fiction novel.

During his stay he would have surely heard tales of a black dog haunting the grave of a wealthy landowner and of the Devil’s own pack of hounds which emerge from Wistman’s Wood, a remnant of ancient woodland near Princetown.

Conan Doyle was a keen hill walker and spent many hours exploring the moor on foot, encountering the prehistoric settlements and ceremonial sites which abound the national park.

While Conan Doyle stayed at the hotel he took on the walk from Princetown to Grimspound and was picked up by his coachman Henry Baskerville — who, it was reported, was the inspiration for the name in the popular book.

Dartmoor National Park has produced a leaflet where local residents and visitors alike can follow in the footsteps of Conan Doyle.

In Victorian times, the landscape would have been far more intimidating to the visitor than it is today but walkers can begin the adventure to see some of the things which Conan Doyle would have seen and gain a greater understanding of the timeless nature of this special place.

Mike Nendick, communications officer for the DNP, said: ‘Place names in the book are a mixture of what’s there on Dartmoor and what’s made up by Arthur Conan Doyle. That’s what makes it so interesting for lovers of Dartmoor — the leaflet will help you get a feel for what inspired Conan Doyle and take a stroll in his footsteps, seeing some of the things that he would have seen and which feature so prominently in his story.

‘The walk links them to the visitor centre — they can also visit the exhibition about Conan Doyle in the centre as he stayed there when it was a hotel.’

In the Footsteps of Conan Doyle (six miles) will take you from Princetown centre to South Hessary Tor, Nun’s Cross, along to Devonport Leat, see a cairn circle and cist, go along to Tor Royal and back to Princetown.

Along the route, walkers can follow the leaflet and read extracts from the book to match what they see before them, including the Fox Tor Mire, referred to in the book as Grimpen Mire.

In the leaflet, you can also read about the many Dartmoor legends and buildings that would have inspired Conan Doyle, including Holy Trinity Church in Buckfastleigh. In the churchyard is a tomb of a 17th century Lord of the Manor, Squire Richard Cabell, with bars across the front, to keep his evil spirit from getting out.

He had a passion for hunting and it is told that he sold his soul to the devil. Legend has it that the night of his interment a phantom pack of hounds were seen baying across the moor to howl at his tomb.

It is reported that Cabell is the inspiration for Hugo Baskerville, who, in the novel, kidnapped a young girl and, when she escaped, rode after her with his hounds across the moor, only to become a victim of the hound.

Legend has it that his grave is haunted by a black dog.

The atmospheric images in the leaflet were taken by Plymouth based photographer Chris Bloodworth, who worked with the national park as a volunteer on the project.

Other self-guided walks leaflets are available from visitor centers at Princetown, Postbridge and Haytor.