Sourton thanks councillors for a total of 100 years of service 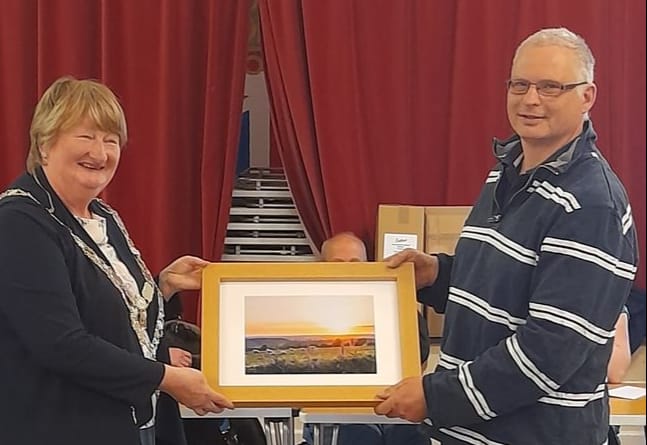 Sourton Parish Council recently celebrated the work of three ex-councillors who have added a combined total of over 100 years of service to the community.

West Devon Mayor Caroline Mott presented ex-councillors Andrew Horn and John Hockridge with landscape paintings as thank you gifts for their service following their retirement during the pandemic.

This was the first time the council was able to present the gifts in person due to lockdowns and covid restrictions.

Mr Hockridge has had a varied career as a parish councillor having served the Sourton community for 56 years overall, 40 of them as the chairman, following in the footsteps of his father and grandfather who served as vice-chairman and chairman of the parish respectively.

Mr Horn is well known for getting involved in community life having lived in the parish for his whole life and was thanked for his role on the council which he had served for over a decade, including his time as chairman of the council which he took over from Mr Hockridge.

There is one more gift to be presented at a later date to ex-councillor Mrs Geraldine Jury who was unable to attend the event due to an ongoing health issue.

Mrs Jury will be celebrated for over 40 years serve to the parish council as well as her work for WI Sourton Friendship Group and the produce show.