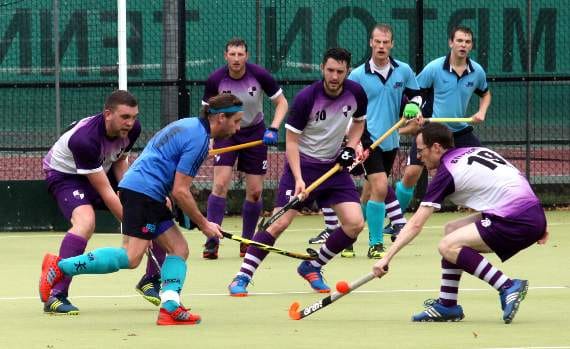 Okehampton first team (in purple shirts) in action with visitors ISCA B. Picture by James BIrd

AFTER a tough loss the weekend before against Exeter University, Oke first team were keen to get three points on the board.

Okehampton started strong holding off a couple of attacks from Isca. Following a flurry of attacks from wingers Jack Watson and Josh Speak, Oke were awarded a number of short corners, which resulted in Sam Whalley superbly drag flicking the ball high into the net.

Isca began to apply pressure to Oke’s defensive wing backs Simon and Caleb Bourne but after some strong defending, Okehampton eventually conceded a goal from a short corner. The home side did not let this fluster them and they pressed on, producing a few key attacks before the half time whistle.

After some rousing words from skipper James Rogers, Oke burst out of the blocks with intensity and aggression and Luke Miller thumping the ball into the goal to make it 2-1.

The home side were organised and clinical, producing some great attacking and defensive game play. Through some more spectacular play Okehampton won yet another short corner. Although they did not convert the initial strike, Miller and Luke Liversidge combined with some neat play to convert Oke’s third goal.

Frustration and poor discipline crept in to Isca’s gameplay, as Oke capitalised on the opposition’s mishaps to make the score 4-1. This came from a creative build up, where players Nick Luxton and Joff Stephens shepherded the ball to Miller, who ’threaded the ball through the eye of the needle’ to Whalley who in turn majestically rounded the keeper to score his second.