ORCs get off the couch, tend to Blister and flee from Romans 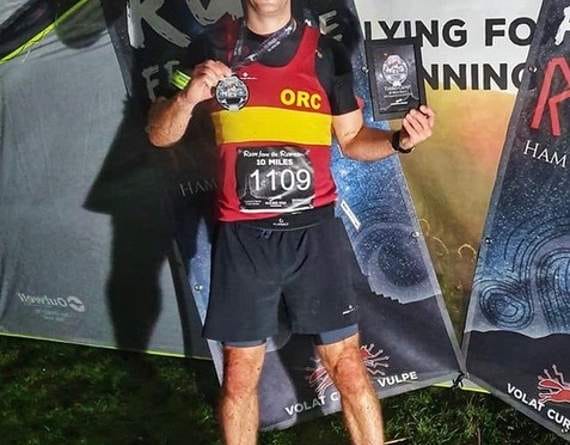 ORC Jeremy Tandy, third in the Run from the Romans.

SUNDAY saw the final day of Okehampton Running Club’s Couch to 5k course, ending with a 5k time trial for the runners to prove they could indeed run 5k now.

Unfortunately some were not able to take part but those who did were rewarded with a certificate saying they had completed the course. Congratulations to Rob Cunnington, Gemma Haines-Lawson, Becky Hawkins, Jodie Monnox, Evie Woods and Sarah Angel. Following this some of the present members from various groups took the opportunity to set a 5k time for their awards.

Route-following by head torch was made more challenging due to fog, making it difficult to spot the reflective course markings at times, so much so that Jeremy took a wrong path during the second lap. Fortunately he got back on course, overtaking those who had slipped by him to finish in third place in 1 hour 17 minutes 58 seconds.

Jane Richardson and Janet White enjoyed trails, hills and some deep gloopy mud when they ran the 10mile Bicton Blister on Sunday.

Starting and finishing at Bicton College, after a short road section the route follows trails across the sandy, stony and sometimes muddy paths of Woodbury Common, an Area of Outstanding Natural Beauty. Both ladies enjoyed their runs with Jane finishing in 2.03.41 and Janet in 2.09.45.