ORCs run away in Italy, Spain and Exeter 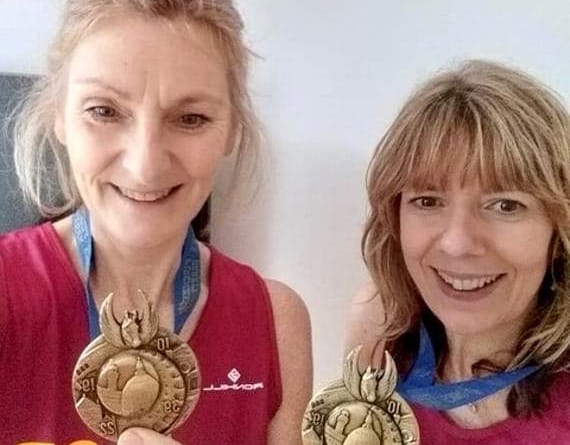 Jackie Dawes and Kate Wilson after the Florence Marathon.

THE third race in the Westward League series was held in Exeter on Sunday, hosting the Devon Cross Country Championships.

The ladies’ team were not at full strength due to injuries but ran well with Claudine Benstead winning the FV60 category but the veteran team were just out of the prizes, finishing fourth. There were some new runners in the junior events with Maddie Burrows and Neve Webber having their first outing for the club.

The previous Wednesday was the Exeter and District versus East Devon School’s Cross Country Championships in Exeter – qualification from which would take the runners to the Devon selection. Sam Priday and Harrison King representing Years 10/11 and Matthew Richards Years 8/9 ran well, Sam finishing second and Matthew fourth, both qualifying, and Harrison 27th.

Kate Wilson and Jackie Dawes travelled to Florence for the marathon on November 24 where 11,000 runners crammed into one of the city’s narrow streets for a mass 8.30am start. The route started and finished in the magnificent Piazza Duomo, passing many historic and beautiful buildings and crossing the famous Ponte Vecchio. The cracked and cobbled pavements made for some tricky running but Jackie achieved her second sub-four hour marathon, finishing in 3.55.33 while Kate ran a personal best of 4.22.00.

Another ORC on tour this week was Robert Richards who ran a 10k in Spain. The race was the Akiles 10k in Casa De Campo, a scenic run through the rolling Central Park in the shadow of the Royal Palace, the former hunting grounds of the royal court in the capital Madrid.

Robert finished in a time of 55 minutes 04 seconds in weather more akin to Britain of cold and pouring rain.