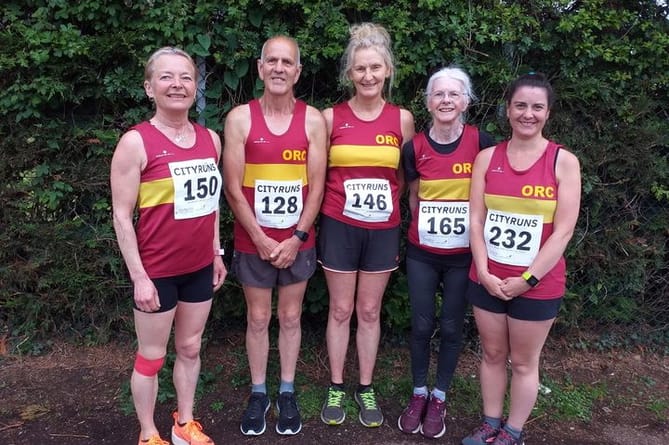 IN PICTURES: Action from a busy and successful weekend of racing from the Okehampton Running Club.

The week started with five members of Okehampton Running Club heading to Exeter on Tuesday for the third event in the 5k Summer series.

This event is a great traffic-free and flat 5km run on footpaths and cycle tracks around Exwick Playing Fields and the River Exe Flood Relief.

The evening was quite warm, and the slight drizzle did nothing worse than cool the runners.

So apart from a shower just before the start and a minor head wind in the finishing straight it was a good evening for running.

Also running was Paul Evison who came third in his age group in a time of 22.34 and an improving Victoria Evison did a splendid time of 31.00.

It was almost perfect conditions for this year’s Oke Croake on Saturday, the second and longest of the Okehampton-sponsored summer series of hill races.

The route takes the runners on a tour of the northern moor, and at 10-plus miles and 2,000ft it is a challenger to any runner.

They leave the park, head to Oke Tor, then across to Yes Tor before dropping back down to Okehampton.

This beautiful route allows the runners to choose their own way across the moor, with the straightest line not necessarily the fastest!

There were 12 ORCs taking part in the race, with Sam Priday the overall winner in a superb time of 1:21:12.

The first ORC lady home, and winner of her age category was Claire Watkins in 1:46:00 and Ian Ripper was first in his age category in a time of 1:49:31.

All the runners said how much they had enjoyed this lovely race hosted by the club.

Five ORCs headed to Princetown on Saturday for the Dartmoor Discovery, or DD as it’s affectionately known, for the UK’s longest single lap road ultra-marathon.

The Dartmoor Discovery is a stunning 32-mile race starting at Princetown and taking in fabulous scenery, as well as some of the toughest hills on Dartmoor, with the loop covering Dartmeet, Ashburton and Widecombe-in-the-moor to name a few.

It’s a fantastically well organised and friendly event which keeps some ORCs coming back for more year after year.

First ORC back was Paul Crease who had a superb run, equalling his sixth place from last year in a great time of 4:11, a PB for him and picking up first male V50.

Robert Kelly had a strong start but struggled with his legs in the latter part of the race, but toughed it out to come home in 14th place in 4:24.

He was closely followed by Chris Turner with a PB time of 4:28 in 15th place.

The ORCs were thrilled to bring home the first male team trophy for the second year running. Brilliant running and well done to all of you!

Starting on the beach they ran through the sea to get to the next cove, where they climbed off the beach and onto the coast path.

From there they ran inland, returning on the coast path via the Rumps headland which makes you feel like you’re right out in the Atlantic and has some fun scrambly sections.

The finish was also on the beach, but thankfully the tide had gone out by then! Jo was very pleased to finish fourth female in a time of 52:49.

On Saturday Jo ran the Eden Parkrun. It was a family affair; Jo was running with her dad and Karen and Paul King running with Ollie.

Ollie smashed his PB by four minutes on a very hilly and twisty route. They then all enjoyed the free entry into the park and an ice cream!

On Sunday Jo and Karen followed this with the Purple Gecko Cardinham Woods Summer Series 10k.

This is a forest trail run starting off with a steady 3km incline, but it’s not exactly all downhill from there, but it did get a lot easier for them...

Jo worked hard in the last two miles to go from third place to finish as first female in a time of 47:24.

Karen had a good run, enjoying her first race back from injury finishing in third place in her age category.

A week of superb running from all the ORCs, well done to them all.