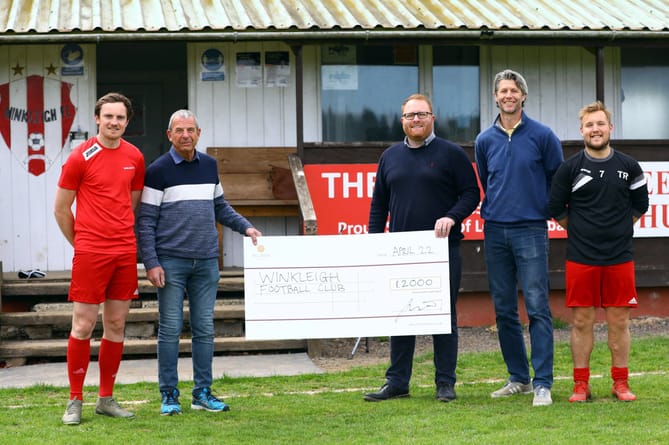 A CASH boost has been handed to Winkleigh Football Club following their final match of the league season.

Housebuilder Allison Homes’ South West region has donated £2,000 to the club, which is based near its brand-new High Moor View development.

Winkleigh played in Division Two of the Devon & Exeter Football League, where they finished second this season, as well as the Devon FA County Cups and Firewatch Devon Senior Cup.

Michele Jones, regional sales and marketing manager for Allison Homes South West, said: ‘We are delighted to be supporting Winkleigh Football Club and wish them the best of luck for when the new season starts.

‘It is very important to us across Allison Homes to connect with and support the communities we provide homes for, and it is something we will continue to do in the future.’

Winkleigh Football Club is based near the housebuilder’s High Moor View development. The brand-new development launched last weekend, and two properties have already been reserved by keen house hunters.

According to Winkleigh skipper Rob Knight, the additional funds will go a long way towards helping plans for an improved clubhouse become a reality.

‘It was a fantastic surprise that a local developer was keen and able to offer sponsorship to the community that they’re joining,’ said Knight.

‘That type of money goes a long way for a club of our size – and we plan on adding it to our clubhouse improvement funds as we work towards securing a grant.

‘Thanks, too, to Joyce Maddox who approached the developers on behalf of the club and really got the ball rolling on it.’

Having finished second in the league – just two points behind champions Teignmouth Reserves – Winkleigh have also received news that they will be promoted to Division One ahead of next season.

‘As far as we’re concerned we’ve been promoted, which is a huge achievement when you think of where we started,’ Knight added. ‘We had such a tough run-in to secure promotion, so it was a great feeling.’