2,700 set to challenge themselves in the mighty Ten Tors event 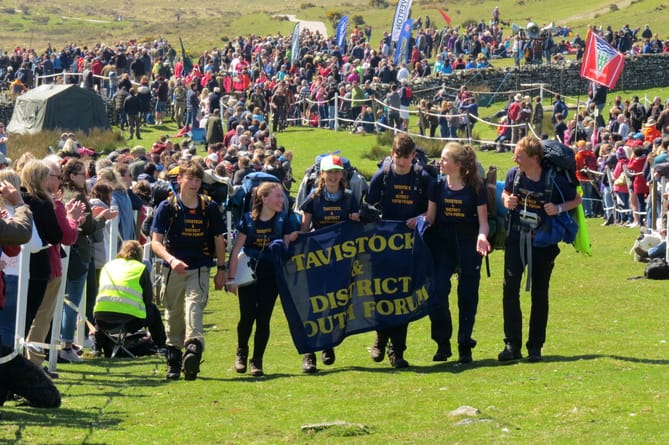 A team from Tavistock and District Youth Forum as they complete their Ten Tors challenge in 2019 (. Pictures courtesy of the British Navy and Cpl Ben Beckett RLC. )

Following a two-year hiatus, cancelled due to the Covid-19 pandemic, Ten Tors — one of the biggest outdoors adventure events for young people in Britain today — is back and will be marking its 60th challenge this weekend (May 7 and 8).

Teams from Okehampton and Tavistock colleges and other local youth groups will be among those taking part in the challenge which is organised by the British Army.

In all, 2,400 youngsters aged between 14 and 19 will take part in Ten Tors, with a further 300 youngsters with physical or educational needs taking part in the Jubilee Challenge.

The majority of the teams who enter Ten Tors are from schools and youth groups from across the South West. These include scout groups, sports and ramblers’ teams and Armed Forces cadet units, all of whom have trained hard over the last few months and are ready to accept the challenge!

Those teenagers taking part will trek unaided over different 35, 45 or 55 mile routes and will encounter some of the toughest terrain and highest peaks in Southern England.

They will rely on their navigational skills and will carry all their food, water, bedding, tents and other essentials as they go. It is a feat they must complete as a team and without any help from adults and they’ll remain entirely self-sufficient during their arduous expeditions, including camping out overnight on the moor.

At 7.30am on Saturday May 7, immediately after the start of Ten Tors, up to 300 youngsters with special physical or educational needs — many in wheelchairs — will start the Jubilee Challenge, competing routes up to 15 miles. The youngsters can enter either as a team or as individuals, each one accompanied by an officer cadet from Exeter University Officer Training Corps.

Founded by three officers from the Junior Leaders Regiment, Royal Corps of Signals following an adventure training exercise for their young trainees, Ten Tors is firmly rooted in the Army institution.

It is meticulously planned by the British Army’s Headquarters South West over many months in advance working closely with other key civilian organisations, such as Devon and Cornwall Police, the Met Office, the British Red Cross and the Dartmoor Search and Rescue Group, who will provide almost 350 volunteers.

Inspirational polar explorer, Captain Preet Chandi will be attending the event this year. The British Army physiotherapist became the first woman of colour to complete a solo trip to the South Pole in 2021. She completed the 700-mile unsupported challenge, in 40 days, 7 hours and 3 minutes, and came tantalisingly close to setting a new world record by a woman for the trek. During the expedition she had to drag all of her food, fuel and equipment in a sled weighing around 90kg.

‘Ten Tors remains the nation’s largest youth outdoor event with an amazing 2,700 14-21 year-olds gathering to take part over the weekend of May 7/8 this year. Nearly 2,000 adults have helped them get here, and we’re expecting in the region of 6,000 parents and friends coming to support the teams.

‘Add to that a strong team of military personnel, civilian agencies and volunteer, meaning a total of around 12,000 people involved in making Ten Tors happen, and you’ll understand why it’s an event that the Army is genuinely proud to plan and deliver.

‘May I take the opportunity to thank everyone involved for their contribution, particularly the local community and Dartmoor National Park Authority for their input and willingness to welcome us back each year.

‘The past two years have been disruptive in so many ways, not least the absence of Ten Tors in 2020 and a virtual event in 2021. I’m therefore incredibly pleased that it’s back to normal this year, a year in which we celebrate the 60th Ten Tors event, at the same time that Dartmoor marks its 70th year of National Park status.

‘I’m delighted that this year’s event will be started by Capt Preet Chandi, also known as ‘Polar Preet’ following her recent 700-mile polar trek. An inspiration to so many, I cannot think of anyone more relevant to start this year’s Ten Tors and get us back to our best.’