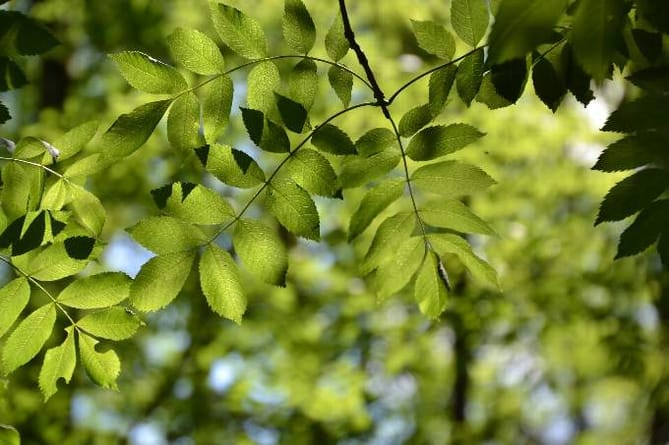 A healthy tree – but diseased ash trees in Skaigh Wood have had to be felled.

Members of StOC (Sticklepath and Okehampton Conservation) and contractors were called in by Belstone Parish Council to fell ten affected trees that were in danger of falling and causing injuries to visitors.

The felled trees have been left to lie on the ground to provide habitats for wildlife.

Parish clerk Sally Fullwood said: ’It will make it safe. There were trees beside the path and we wanted to clear them to prevent injuries.’

Some affected trees were left standing because they are unlikely to cause any problems at the moment.

The council will not be replacing any of the fallen ash trees because the saplings are even more susceptible to ash dieback.

’If we were to replace any trees, it would likely be with other native species such as alder or oak,’ said Mrs Fullwood.

However, this may not happen as the council were advised to let replanting happen naturally.

Ash dieback has become a problem across Britain and is caused by a foreign fungus which affects the tree’s vascular system and prevents nutrients reaching the branches. At the moment there is no cure and felling is the only option.

Symptoms include wilted and spotted branches, diamond-shaped lesions on the trunk and blackened hanging branches.

Belstone’s council has asked residents to check their ash trees and report any that might be affected by the disease to the Lord of the Manor Michael Reddaway on 01837 840465 or Belstone Commoners’ Association secretary Jenny Gibbons at [email protected] or at on 01837 840282.