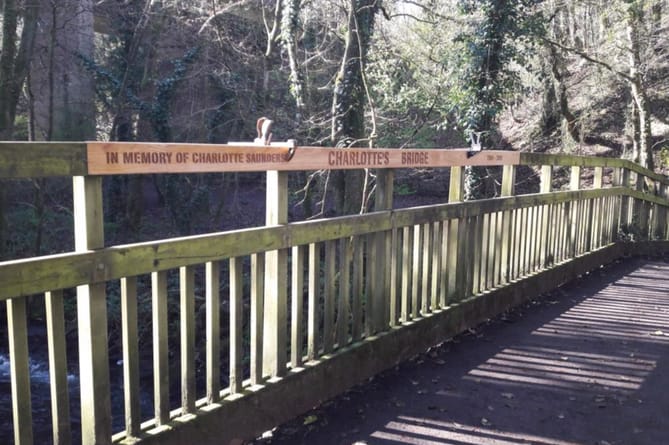 A tribute to a young girl who lost her life while crossing an Okehampton river has been given a vandalproof upgrade.

Charlotte’s Bridge across the East Okement river at Fatherford Woods was put up in 2011 to remember Charlotte Saunders, who lost her life aged 12 trying to cross the river on horseback. Signs on the bridge have been repeatedly vandalised. Now Okehampton town and borough councillor Tony Leech, whose daughter Claire knew Charlotte well, has led efforts to put up a new hand-engraved  fencing to ensure a fitting memorial to Charlotte.

He said:  ‘We cannot be sure that those who constantly vandalise this bridge will not do it again, but at least this time the carved wording is deep enough for us to be able to clean off any graffiti and still leave the sentiment in place for some time to come.’

Cllr Leech said he wanted to pay tribute to the generosity of three people who gave their servcies free of charge.

These were wood engraver Mark Hoskins of Wild Work in Widecombe in the Moor, who did the engraving, Anton Coaker of English Timber at Sherberton Farm,  Hexworthy who supplied the piece of chestnut from which the new guard rail was constructed, and Devon County Council rights of way officer John Baker who arranged for the new rail to be installed on the bridge, a job carried out by K S Fencing of Barnstaple.

Cllr Leech said: ‘Although all the way through this process I had said that I would fund the project,  Marc, Anton and John have said that they were happy to do this all free of charge.  That’s why I would like to publicly thank all those involved.’

Cllr Leech’s daughter Clare knew Charlotte from a baby, as she worked at Charlotte’s family’s stables near Fatherford. She went riding with her often and they would often cross the ford over the East Okement river at Fatherford Woods together.

At that time, horse riders had to cross through the ford as there was just a footbridge for walkers across the river, a popular route from Okehampton onto Dartmoor.

After Charlotte’s death, the community fundraised to replace the bridge with one wide enough for horses to use.

Cllr Leech said: ‘My daughter Claire had known Charlotte from birth, and had helped her learn to ride, and would have been with her on the day of her accident, but we were back in Suffolk that weekend for a family event.

‘Claire has always felt that she should have been there, and then Charlotte would never have attempted to cross the river.

‘It was in fact Claire and my wife Sue’s idea to have the bridge replaced and called Charlotte’s Bridge, and it was Charlotte’s friends and family, and in a very very small way me, who kept pushing on the Devon County Council door until it finally opened.’

In recent years, there has been an outcry after the sign on the bridge was vandalised, not once but twice.

‘Last year the metal sign, on the bridge was replaced entirely, but was again vandalised

It was this which set Cllr Leech thinking of a new approach. He asked John Baker, Devon County Council’s public rights of way officer, whether they could possibly remove one of the top rails on the bridge aand replace it with the information about the tragedy.

‘John provided me with a couple of companies that he was aware of who might be able to help with producing the top rail, and I set about making phone calls..

He made contact with Marc Hoskins of Wild Work from Widecombe in the Moor, who makes fingerposts used on moorland footpaths, and English Timber from Sherberton Farm, Hexworthy, Dartmoor, where the owner arranged to look out a piece of chestnut. The new piece of woodwork has now been delivered to Cllr Leech, ready for it to be installed in time for Easter.