Community day of song for Jubilee 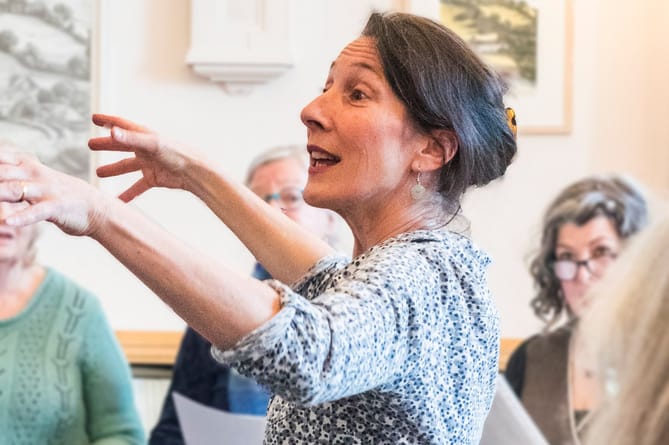 Calstock Arts is thrilled to be hosting a free and open to all Big Community Singing Day over the Jubilee Bank Holiday weekend.

Visitors to Calstock Arts on Saturday, June 4 will be invited to revel in the hit music of 1952 and singing will be led by Helen Porter, director of Calstock’s Big Jazz Choir.

Helen, a singing teacher who lives just outside Calstock, will be leading the singing on the day as well as coaching soloists in advance.

Helen said that 1952 proved to be a great musical treasure trove from which to choose the programme for the day.

‘Some great and memorable songs were written or released in this year including songs such as Singing In The Rain, from the hit film When I Fall In Love, Kiss of Fire. Boy bands such as the Four Aces were at the height of their fame, and Doris Day and Rosemary Clooney (George Clooney’s mum) were having huge success on the international stage,’ she said.

‘Revisiting the musical landscape of 1952 is a really special way of commemorating the music-lovers, songwriters and performers of the day, and of the coronation itself. We hope very much you’ll join in this uplifting day of song.’

‘It’s been wonderful to secure this additional money to support our event,’ she said. ‘We’re hoping that people of all ages and musical ability will join us for a feel-good musical celebration!’

While her own regular choir, which meets at Calstock Arts, concentrates on jazz, Helen stressed that this day would be very much a celebration across the genres of the popular music of the day.

‘The Charts actually started in 1952 and lots of the songs we know are actually from the top 30, although they are not always the best songs!’ she said. ‘There are many others to discover too. I’m also trying to encourage songs form the classical repertoire and opera and anything that was going on in 1952 musically. I want all styles to be included.

‘I’m also going along to Calstock Primary School to do a couple of songs with the children there. One of the songs we are doing is Jambalaya, that’s a lovely one to do with the kids. Also, did you know that How Much is That Doggy in The Window is from 1952?

‘The day is all about the music. If people aren’t royalists they can still come along and sing.’

‘Everyone is getting quite excited about it,’ added Helen.

‘The funding from the Arts Council came though quite late, so it is one of those projects where it has been put together quite quickly. I am whizzing around holding meetings with ukulele players and twisting people’s arms, getting them to do solos!

‘This is a community singing day; we will rehearse during the day and then hold a public showcase of what we’ve put together.

‘It has been interesting to find the songs that people would still know now and then there are some really lovely songs which people have never heard of nowadays.

‘The Four Aces were amazing singers. We will have their Please Mr Sunshine performed by a trio of women singers I work with. Also by the Four Aces we have Tell Me Why, which is just such a gorgeous melody. Then there is a wonderful song The Blacksmith Blues by Ella Mae Morse, and Kiss of Fire, which is a tango. There is some terrible stuff too, I might do some of that as well! There is In a Golden Coach which is a terrible song but it does seem quite appropriate for the Queen’s Jubilee.’

She added: ‘I’m working pretty much full-time on the project and I’m now going to be making arrangements and bringing in the different soloists. People who want to sing solos get an hour’s tuition with me and then there will be rehearsals on the Friday and Saturday.

‘On the Saturday morning will be the big community singing workshop so we will be singing three or four of the songs with whoever comes along.

Helen is coaching those who are playing instruments or singing a solo as part of the day in advance. Helen is asking those interested in singing on the day to contact her in advance at [email protected]

The full programme for the day’s events can be found on the Calstock Arts website at www.calstockarts.org or follow Calstock Arts on Facebook for further details and updates.