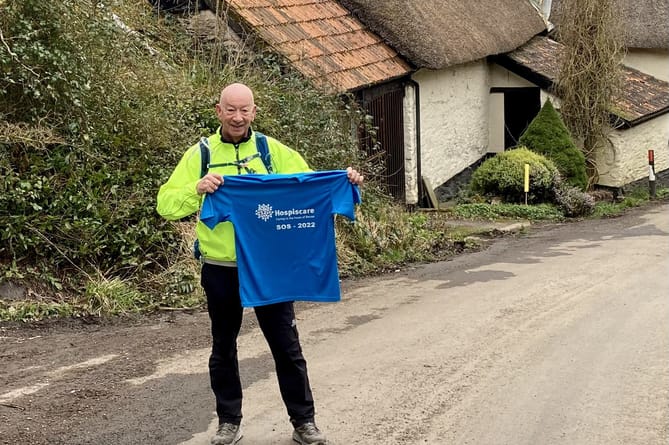 A Devon man crossed the Dartmoor area last week as part of a 300-mile walk across the county to raise money for health support charity, Hospiscare.

Alan Rowe, who lives in Honiton, challenged himself to walk across Hospiscare’s support range to raise money towards the £8 million needed annually to keep the charity’s service running.

He said: ‘I have supported Hospiscare in many ways for 32 years, seen it grow and have known many people personally who have received the most incredible care. If we don’t support it then we will lose it as only a very small percentage comes from the government.

Alan completed the Dartmoor leg of his journey on March 14 when he passed through Sheepwash, Highampton, Stewdon Moor and walked by Patchacott.

He started his journey from Exeter on February 26, the day before the anniversary of this MBE award which has was given in 2002 for ‘services to the community, especially Hospiscare,’ and two days before his 71st birthday.

He has now completed over 150 miles of his journey.

He is also hoping that the walk may encourage military charities to donate to their local hospice in order to help veterans through end-of-life care.

This is particularly close to Alan’s heart as he set up, the Baton, a military support charity, in 2008 to raise awareness of the work of the country’s armed forces and support military personnel.