Duo returns to a favourite place 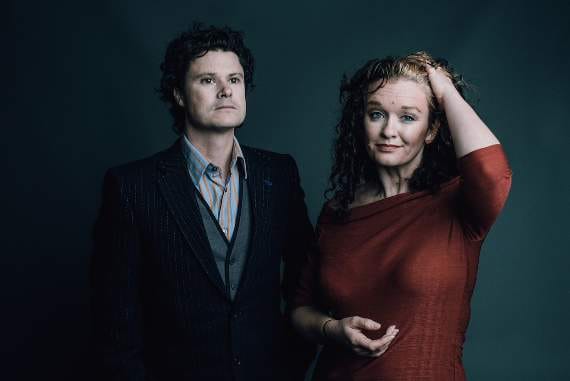 CALSTOCK ARTS is once again hosting folk duo Sean Lakeman and Kathryn Roberts for two concerts at The Old Chapel.

On one occasion that Kathryn Roberts and Sean Lakeman played in Calstock they sold out so quickly that they were asked if they were available for the following night as well. They were available. . .and that promptly sold out also! Having learnt from that, this time they have been booked for two nights.

The duo describe The Old Chapel, which looks out onto the River Tamar, as ‘one of our favourite venues. The acoustics really are incredible plus you can see Devon out of the window.’

Kathryn and Sean are one of the folk scene’s most successful duos. They won the BBC Radio 2 folk award for best duo in 2013 and 2016. The couple’s intimacy and strength of passion have won them many fans and an enviable reputation as ‘songwriters par excellence’ (fRoots magazine). Their original songs cover such subjects as wicked mermaids, Norwegian legends and a lonely whale.

Twenty years of collaboration with other folk luminaries such as Seth Lakeman, Cara Dillon, The Levellers, Kate Rusby and Show of Hands is another indication of their stature.

Kathryn’s early career saw her in a duo with Kate Rusby and together they created an award-winning album. Kathryn was also the first winner of the BBC young tradition award. Along with Seth Lakeman and Kate, Sean and Kathryn were founder members of Equation with whom they successfully toured the world before returning to the UK.

Sean is also a much sought after album producer whose credits include work with the likes of Billy Bragg, Bellowhead, Show of Hands as well as his brother, Seth. MOJO has said of him, ‘As a guitarist, producer and co-songwriter (he) is one of the unsung heroes of modern British folk’.

Their writing style often sees Kathryn sat on her own at the piano equipped with a glass of wine before working with Sean on the fine tuning. Hidden People was their highly successful first album. It’s been said to contain one of the best songs about the miners’ strike, The Ballad of Andy Jacobs, written not as an overtly political piece but through the intensely personal experiences of the people involved. It was nominated in the BBC best original song category in 2012.

Arguably, the best of their albums, Tomorrow Will Follow the Day came next with one of the tracks, A Song To Live By often being singled out as the highlight. It was recorded very simply in their home in Horrabridge using their own piano.