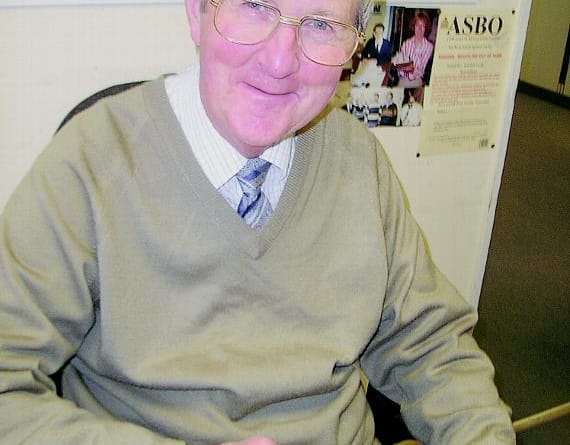 LEGEND of sport and former Tavistock Times employee Mervyn Palmer from Bere Alston has died after a short illness, aged 71.

Merv, who worked in the accounts department and also wrote sports reports at the Times in the 1980s, was sports reporter for the Times’ sister paper The Cornish and Devon Post for many years.

His popular cheeky column Merv’s Mentions was known far and wide and captured the comings and goings of people’s lives in the area.

Armed with a notepad and pen, Merv would immerse himself in local events and people loved to see him, whether it was at a sports game or around their kitchen table for a cuppa.

Both at work, and in his spare time, Merv’s number one love was sport. Former colleague at the Times Ted Sherrell said: ‘Merv’s involvement in so many aspects of local sport was comprehensive and it is doubtful there was anyone as well known, liked and respected in sporting circles throughout large swathes of Devon and Cornwall.

‘His witty, perceptive columns in local papers were a delight — a joy to read. He was also a man of integrity, principle, kindness and compassion.’

Colin Squire from Bere Alston Bowling Club, who Merv played the organ for at his wedding, said: ‘Merv was a Bere Alston man and a bloody nice guy.

‘He was a real gentleman and would do anything for anybody.’

Editor at the Times Alison?Stephenson said: ‘I worked with Merv for six years at the Cornish and Devon Post and saw him now and again when he popped into the Times for a chat. He was a lovely man, and always keen to hear what you had been up to.

‘He had a cheeky sense of humour and a caring nature and he could get away with all sorts! He always had a smile on his face and made you feel happy being in his presence. We will all miss him greatly.’