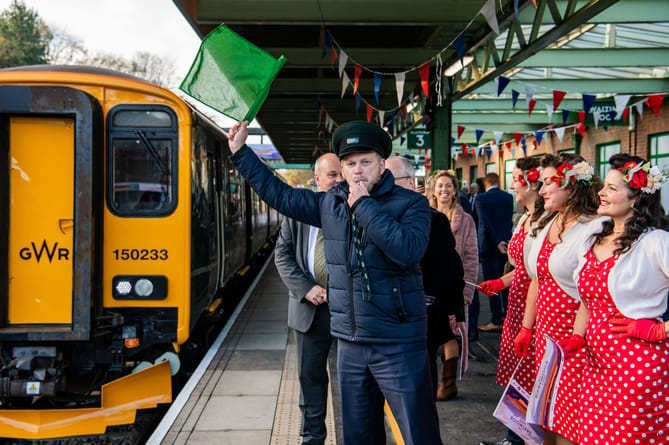 COUNCIL chiefs have admitted that their bid for a government-funded Parkway station in Okehampton is a ‘once in a lifetime’ opportunity.

West Devon borough councillors have agreed to make a second attempt to secure around £12 million from the Government’s £4.8 billion levelling up fund despite its first bid failing earlier this year.

The new station, planned for east of Okehampton on Devon County Council land, would be part of a transport hub effectively linking outlying parishes with the rest of the world via the town’s newly restored rail link with Exeter.

The new bid for what is being called the West Devon Transport Hub proposes it to be up and running by March 2025.

Okehampton already has one station, opened in 1871 and closed in the 1970s amid a rash of national rail cuts, then reopened last year following an intense campaign by local supporters. But the present access road is frequently congested with traffic and would-be passengers are said to have missed their trains because they can’t get to the station in time.

Former mayor and Okehampton representative on West Devon Borough Council Cllr Julie Yelland told her fellow councillors: ‘I don’t think I can emphasise how important this is the people of West Devon, the wider community and Okehampton. The reopening of the line has been phenomenally successful, but the access to the existing station is a challenge with traffic congestion.’

Cllr Yelland said the Parkway station and the hub would have an impact in getting cars off the road, while Okehampton colleague Kevin Ball added that the next step was to build on the success of the restored rail service. A report to the council said West Devon had been identified as priority 2, or medium need, under the levelling up fund (LUF) criteria. The report made it clear that following feedback on their first bid with partners Devon County Council, Network Rail and GWR – for £11.2million – they had passed the majority of that criteria and they had only just missed out on getting the cash.

It says, with the council council and rail officials, they intended to submit a bid and adds: ‘The West Devon Transport Hub presents a once in a lifetime opportunity to transform Okehampton and the surrounding hamlets with a multi-modal travel exchange, to create a thriving neighbourhood that welcomes everyone.

‘It will include (a) new station, lift and platform, a strengthened active travel cycle and walking offer, bus interchange, car park, EV (electric vehicle) charging, be fully accessible to wheelchairs and prams, and host a social wellbeing space. A matched funding contribution of £1.2m by Devon County Council has been ring-fenced from the original bid.’

The report continues: ‘The bid is supported by Mel Stride MP, as well as the areas of Torridge, North Devon and Cornwall. The council is intending to write to all Devon MPs to seek their additional awareness and support for the West Devon Transport Hub bid.’

It said schemes need to be deliverable by March 2025 and added: ‘As a result of the Exeter to Okehampton railway line’s reopening at the end of 2021, the need and urgency for the West Devon Transport Hub in Okehampton has increased.

‘The successful delivery of the West Devon Transport Hub would see congestion reduced on Station Road in Okehampton, but crucially maximise connectivity for the region through convenient multi-modal access to the railway line in close proximity to the A30.

The scheme is likely to cost £12 million to £13 million, being around £10 million for the platforms and bridge and £2-3million for the car park, bus interchange, and cycle and pedestrian infrastructure.