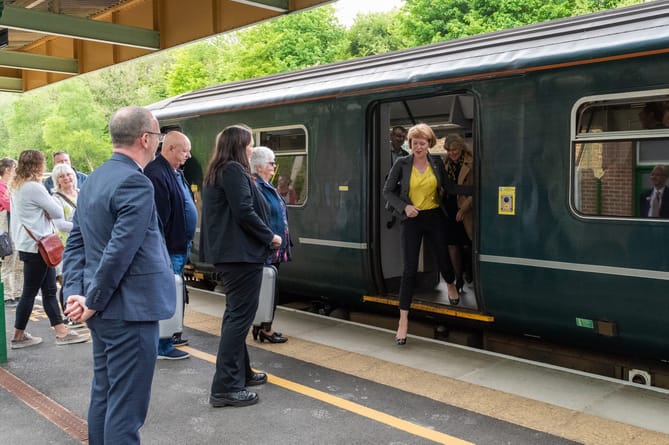 Rail minister Wendy Morton described the Dartmoor Line as ‘phenomenal’ as she boarded the Exeter-Okehampton train last week ahead of the start of the hourly service.

Mrs Morton commented on the popularity and importance of the Dartmoor Line for tourism and the environment following her first-time visit to Okehampton Station where she was treated to a special tour of the refurbished station.

She said: ‘It was a really good atmosphere on the train. But I think what struck me was the number of passengers. It really demonstrated to me the popularity with local people, the community and tourists as well which demonstrates how important rail is.

‘I think the line really demonstrates what the rail is doing in terms of connecting people in communities, providing people with opportunities and as part of the levelling up agenda. But rail also has a really important aspect to our environmental agenda and moving cars off roads.’

The rail minister’s visit came as normal service resumed following the completion of engineering work on the line ready for the introduction of the hourly service which began on Sunday.

Mrs Morton boarded the train at Exeter St Davids station along with hundreds of members of the public, including Ashbury-born Michael Mills who was taking a ‘trip down memory lane’ with his siblings following the resumption of service.

Mr Mills, 80, said: ‘The railway is our background. My father was a signalman from 1949 to 1978 and worked at Okehampton station so this trip for us today is a trip down memory lane.’

His wife, Kate, added: ‘When we used to travel down to see Michael’s father, the children wanted to see if grandad was in the signal box. We’re just going to enjoy a meal in Okehampton and have a wander around today.’

Passenger numbers are double the expectations of the railway companies when the line re-opened in November last year.

In the first 20 weeks alone more than 50,000 journeys were undertaken and railway bosses are expecting the new hourly service to attract more railway users.

Stuart Calvert, who is responsible for Network Rail’s investment projects, said: ‘We’re still on a two hourly service and we’ve got double the amount of people who we forecasted would travel. Going to an hourly service will create another dimension particularly with the summer coming up. I think it will do extremely well.’

In expectation of the increased footfall, Okehampton station managers are also working on extra refurbishments to the station which will include re-opening the platform cafe and building an undercover waiting area for passengers.

There are also plans to renovate the old signal box to create a train museun which will outline the history of the railway in Okehampton.

Last month, railway advocates applied for funding to open a second station on the east side of Okehampton which they say will provide commuters with easier access to the town centre and relieve congestion.

This is the second funding application following an unsuccessful first attempt.

Since its re-opening the Dartmoor Line has created a regular, year-round service for the first time in almost 50 years and is part of the Government’s £500 million manifesto commitment to ‘Restore Your Railways.’

The line was the first to re-open under the flagship programme and was fully and was completed £10 million under budget.