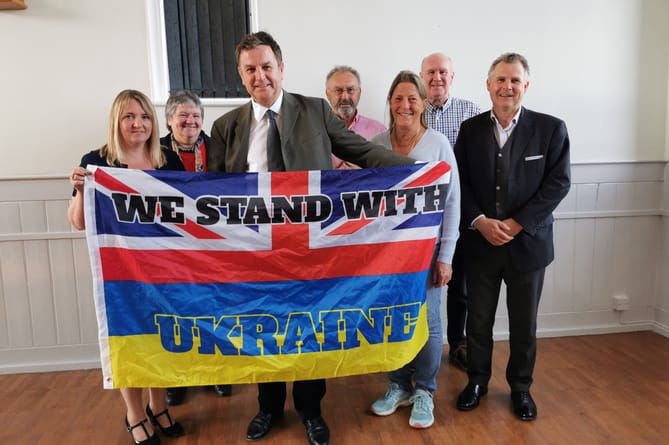 CENTRAL DEVON MP Mel Stride joined several West Devon borough and county councillors in Whiddon Down recently for a wide-ranging meeting that included the war in Ukraine and the rising cost of living.

Mr Stride updated the group on the parliamentary inquiry he is currently chairing into the effectiveness of the sanctions against Russia and the action he has taken to support more than 100 visa applications for refugees coming to Central Devon. Mr Stride’s vocal support of Ukraine has seen him personally sanctioned by Putin’s regime.

He also spoke about the impact of the Russian invasion on the UK, including on businesses, fuel prices and domestic energy costs, all of which have pushed up inflation and had a major impact on the cost of living. Mr Stride was joined by Conservative borough councillors Cllr Nicky Heyworth (Chagford), Cllr Paul Ridgers (Drewsteignton), Cllr Julie Yelland (Okehampton South), and Cllr Barry Ratcliffe (Exbourne) and Exbourne borough and Okehampton county councillor Cllr Lois Samuel. The group were joined by Devon county councillor James McInnes (Hatherleigh & Chagford).The councillors reported that the meeting with the Conservative MP had been helpful .

Cllr Heyworth said: ‘It was very useful to sit down with Mel and discuss the invasion of Ukraine and I am pleased he has been so active in supporting vulnerable refugees. It was also vital to discuss the impact of the war on businesses, families, and food security here in Devon.’

Cllr Yelland added: ‘As well as the important national issues we discussed, it was also good to touch base with Mel on the Dartmoor Line and the need for a second station on the eastern edge of town. It was good to hear Mel had been in contact with the Rail Minister Wendy Morton again this week about this and that he will be lobbying in support of Devon County Council’s bid for funding that was submitted last week.’