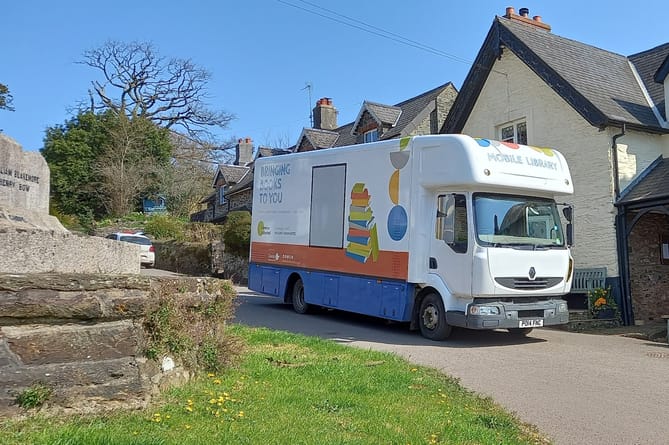 A new mobile library bringing books to rural communities has launched in West Devon and the South Hams, replacing the much-loved previous van Gertie who has gone to a well-earned retirement.

Libraries Unlimited bought the vehicle with the help of Devon County Council, and launched a successful fundraising campaign to refurbish it.

Now the mobile library will make 80 stops around the South Hams and West Devon each week, joining the four others in the Libraries Unlimited fleet.

The vehicle hit the road this February, and now travels over 800 miles every month.

Mobile library assistant Heidi McCoy, who drives the van, said: ‘Mobile libraries were always important, but the pandemic has shown how vital a connection they are to so many people. The library connects small villages and hamlets across the South Hams, skirts around Plymouth, travels across Dartmoor into West Devon and makes two stops in Teignbridge too.

‘We bring 2,000 books for people to browse or order, including large print and audio books. Just as importantly, our mobile library will bring a smile, a chat, a chance to talk to other local people, and contact with the wider world in Devon and beyond. Many of the villages we visit have no public transport, so regular visits to our library buildings could be impossible for many. It is much more than a book delivery van though. The mobile library is an educational, social, wellbeing, and cultural service.’

The new mobile library has replaced a much-loved vehicle nicknamed Gertie, following many thousands of miles service in the area. Last year customers borrowed over 11,300 books from Gertie.

The replacement vehicle is only six years old and was bought second hand with a £15,000 grant from Devon County Council – a tenth of the cost of a brand new vehicle. A similar amount was raised by fundraising to kit it out and put new paintwork and signage on the outside. Fundraising has been a community effort with donations received from the Wakefield Trust; Atherington Parish Council; South Ham Councillors Cllr Reeve, Cllr Pannell and Cllr Smerdon; West Devon Councillor Cllr Mott; Locality Funding from Cllr Ball, Cllr Hosking, Cllr Hawkins and Cllr Brazil; Samford Spiney and Horrabridge WI; Ringmore WI; Sir John and Lady Amory’s Charitable Trust; Yelverton Rotary Club; customers; online donations; support from library suppliers Bolinda and Overdrive.

With only 29,000 miles on the clock, it is expected to give many years of service to the community.

A network of 54 libraries in Devon and Torbay, and four Devon mobile libraries, are run by Libraries Unlimited, an independent staff and community owned charity. See librariesunlimited.org.uk.