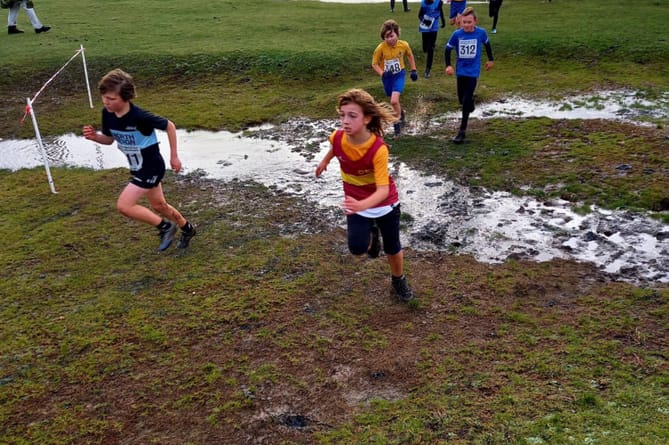 Recent rain cleared to leave a bright and windy day at Northam Burrows. Driving down towards the course the sea looked ominous with larger than expected waves crashing, but luckily these were lost behind the bank of pebbles giving the course some protection from the westerly wind.

It is a flat course, generally not enjoyed by runners because of this and its exposed position. At any point it is possible to see the whole course and the laps are typically longer than other meetings which isn’t to everyone’s liking.

Although there are no hills there are frequent ditches to either jump or run through which is both energy sapping, and often precarious, leading to tumbles and falls.

First to run for the ORCs was Kelsey Davies in the Under 11 girls race. Club members were all especially glad to see Kelsey as she was the sole female representative at the meeting. Kelsey appeared a little nervous at the start line, this being her first Westward league run of the season. Any nerves disappeared on hearing the starters whistle and she powered towards the leading girls. She ran her 2,200m lap with apparent ease and coped brilliantly with the course to finish 14th.

The Under 11 boys were up next. ORCs had five runners in this race which included Ollie King and Stanley Hicks who had tackled the course before, and newcomers William Bussell, Ezekiel Evans, and Laurence Hicks. The most smiley runners of the day were definitely Zeik and Ollie and their attitude to their running sets an example to us all.

The finishing positions in this category were Stanley 17th, Zeik 25th, Laurence 40th, Will 41st and Ollie 42nd. Thanks to Lucy and Karen for taking great photos as always.

The Under 13 boys race was combined with the under 15 girls race, which gave Arthur Hicks a larger field to compete in. Arthur was a late entrant after his rugby match got cancelled the day before and he decided to come along just before his dad was leaving Okehampton!

The lack of preparation made for a relaxed run and Arthur enjoyed having the girls there too making it a busier course.

He finished his 3,800m run in 30th position having a thrilling last 200m race with another boy and a girl in which he came out on top. It was his most satisfying finish of the season.

Stan Wood ran in the Under 15 boys race wearing his ORC vest and leaving the white and red of Exeter Harriers in his drawer! He ran 4,400m and finished 13th after a good run on a relatively empty course giving him with fewer people to chase.

Stan is moving towards a strong overall finish to the season with another consistent performance.

The men’s course was three long laps equalling 8,565m and was combined with the Under 20 men. With nine runners in this race, ORCs were one of the highest represented clubs.

Chris Turner was first back finishing 25th in a performance he should be very pleased with.

It was Mike Davies first cross country race and he finished in 87th place, cheered on by his wife, children and dog, which members hope will become a regular addition!

On finishing they all said how enjoyable it was to run in a team event, and with this in mind the club looks forward to Redruth in a few weeks time.