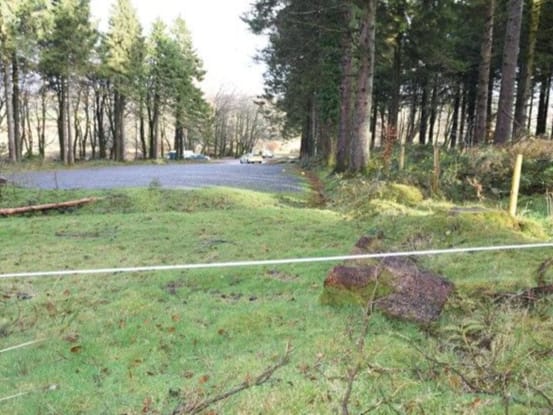 Scene of the attack at Bellever Forest

A PLYMOUTH man obsessed with serial killers has been jailed for life today for murdering an 18-year-old woman on Dartmoor.

Cody Ackland, 24, was sentenced to a minimum term of 30 years and 190 days for murdering Bobbi-Anne McLeod.

Plymouth Crown Court heard that Ackland, 24, struck Bobbi-Anne McLeod on the head with a claw hammer at a bus stop in Leigham, Plymouth, on the night of Saturday 20 November last year.

He abducted her in his car and drove to Bellever Forest car park on Dartmoor where he repeatedly attacked and then murdered the teenager.

Ackland then disposed of Bobbi-Anne’s body at Bovisand near Plymouth.

He later threw away her clothes in an allotment before going out to party with friends.

Three days later he turned himself in to police and confessed to the murder.

He then told detectives where he had hidden Bobbi-Anne’s body.

Ackland, from Southway in Plymouth, pleaded guilty to murder at Plymouth Crown Court on 5 April and was sentenced today, May 19.

The court heard that Ackland was leading a double life and had a secret – a morbid interest in serial killers from around the world.

He was particularly obsessed with US killer Ted Bundy whose kidnap and murder of young women bore similarities to Ackland’s crime.

There were pictures of Bundy and the weapons he used on his phone.

In the days and weeks leading up to Bobbi-Anne’s death, Ackland searched the internet for information about serial killers’ crimes.

He also browsed for remote locations on Dartmoor and for potential weapons.

The court heard that on Saturday, November 20, Bobbi-Anne left her Leighham home around 5.45pm to see her boyfriend, heading to a nearby bus stop. She never arrived.

Later that evening her worried family and boyfriend alerted the police.

It was here he attacked her repeatedly with the hammer outside the car before burning her handbag nearby along with other items from the vehicle.

Ackland then put Bobbi-Anne into his car boot and drove to Bovisand, pulling into a layby on the remote lane around 9.15pm, before putting her body in undergrowth. He then went home to bed.

The next day he drove to Tamerton Foliot north of Plymouth, threw the hammer into the River Tamar and a carrier bag containing his and her blood-stained clothing into nearby allotments in Coombe Lane. The hammer was never recovered despite a thorough police search.

Ackland then went for pizza with a friend, attended practice with bandmates in his rock band, got a takeaway and drank into the early hours of the next day with friends at a pub lock-in. Friends recall him being ‘happier than usual’. Ackland went to the cinema the day after.

In interview he told the police that the killing was not on his mind because it was ‘so out there’ and extreme that it was almost like a film or fantasy, something that hadn’t really happened.

Investigators uncovered 3, 216 images on Ackland’s phone, many of a disturbing and dark nature and reminiscent of horror films.

Senior Crown Advocate Richard Posner told the court that Ackland’s interests were ‘sinister and relevant to his motivation’, saying: “His interest in the macabre presents as deep-rooted; a fascination with death, murder and murderers and the means to commit murder.”

On sentencing, Judge Robert Linford told Ackland that his act was ‘determined savagery’ saying that he was satisfied from the evidence that he intended to kill.

“This was a prolonged and awful ordeal for this poor person. She had the whole of her life in front of her until it was brutally and savagely snuffed out by you,” he said.

“You were quite clearly planning murder and you did murder.”

Following today’s sentencing Bobbi-Anne’s family paid tribute to her, saying that she was ‘beautiful from the day she was born’ and spoke of her dreams for her life ahead. Bobbi-Anne wanted to become an interior designer.

They said: “Bobbi was a beautiful girl who lit up our lives and the lives of everyone she ever met. She was kind, funny, and loyal. She was the best daughter, the best sister, and the best friend to so many people. Everybody who knew Bobbi loved her. We have been robbed of our beautiful girl in the worst possible way and our lives will never be the same without her.

She said: “This was a shocking and brutal crime which led to a young life being tragically cut short and changed the lives of Bobbi’s family forever. The details of the case heard today were harrowing, particularly for Bobbi’s family.’