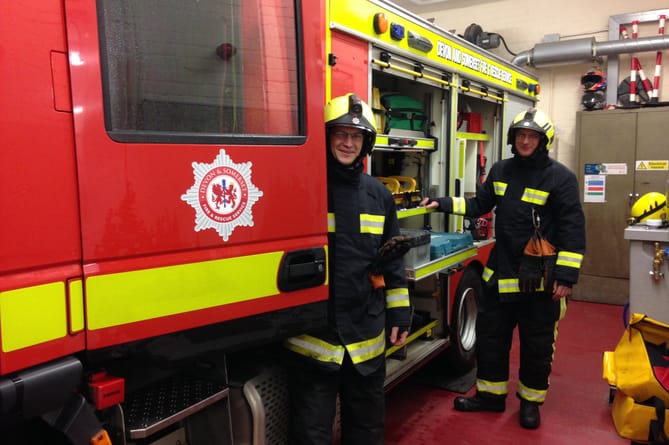 Hatherleigh Fire Station is so short of crew, the station has sometimes been unable to respond to shouts, it has been revealed.

A minimum of four crew members are needed to take out the appliance from the fire station in Bridge Street.

However, with just seven retained crew currently on the books, this is leaving very little slack to respond at all times.

Hatherleigh firefighter Stefan Farley said: ‘I must admit we have been struggling to recruit for a few years now. There are occasions when the appliance isn’t available now because of staff shortage issues and then applicances from Okehampton, Holsworthy or Torrington have to cover incidents.

‘If there is a big fire we have on occasions been off the run. There have been incidents in what we would class as our patch that have been covered by other stations because we haven’t had the staff.

‘At Hatherleigh at the moment there are seven of us and we have a probationer starting at the end of the month but we should have a complement of 12-14 staff. The appliance needs a minimum of of four of us. There are times when there are only three of us going down to the station when pagers go off during the day and that then means that the appliance won’t go out.’

Hatherleigh, in common with other rural towns in Devon, has been increasingly struggling to recruit retained crew as fewer people live in the town where they work.

The fire service has tried to adapt to that and fire crew are now paid a fee to be on call for specific days, which could be part of the week, to allow more flexibility. They are then paid on top of that for each shout they attend.

Stefan himself works as a security engineer, travelling all over the South West. He is on call for the Hatherleigh Fire Station on Mondays and Fridays and every other weekend, when he is back home in Hatherleigh

He said: ‘We’ve got plumbers, a groundsworker who does garden maintenance and we have got mechanics among the crew, so all walks of life,’ he said. ‘We’ve also got a gentlemen called Terry Reynolds, who I wouldn’t say is retired but who is taking it a bit easier now. He is still in the fire service with us and he is thrilled to be train someone up.’

Stefan added that being a firefighter in your own community was very rewarding. ‘I grew up in this community and I have always been one to be community spirited. I like to help people out. What you gain is life experience and the experiences of what you get to do as a firefighter are fantastic. I have learned first aid and as a co-responder I have helped the South West Ambulance Trust. The experience you get and the training you get it fantastic and it does help in your other life too.’

He said people could come down to the fire station on their practice nights, Thursday, from 7pm or message the crew via Facebook to arrange to come and see around and have a chat about the role at another time.