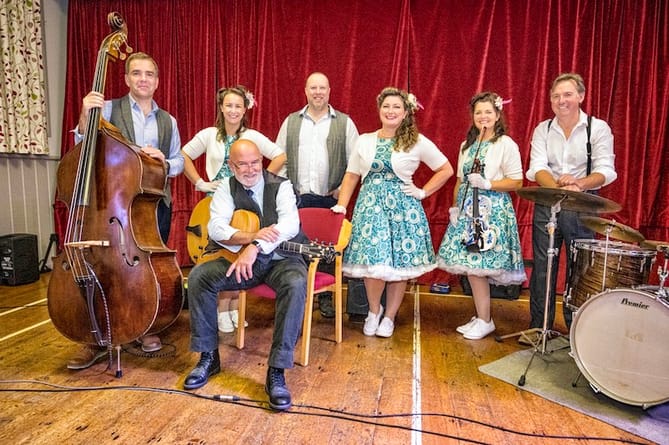 Close harmony female singing group, The Hummingbirds, are set to perform at the opening of the Dartmoor Line on November 20.

As the first regular passenger train from Exeter in nearly 50 years pulls into Okehampton Station, the ladies will sing some classics of the Andrews Sisters, a 1940s American swing and boogie-woogie era close harmony trio comprised of three sisters.

’We’re excited, but the train comes in at 7.30am so we’re going to have to be up very early to prepare for the show.’ said group member Gemma Rich, aka Hummingbird Grace.

This will be one of the group’s first performances since March 2020 when the first covid lockdown occurred, though it didn’t stop them from performing.

Throughout the past 18 months, The Hummingbirds live-streamed performances when they could and regularly posted their series Lockdown Living with The Hummingbirds, which was all recorded and edited remotely via mobile phones.

Now they can perform in person again, they have ramped up the energy and set themselves a busy schedule.

So far, the Okehampton-based ladies are booked to perform at two Christmas events: the Lydford Lights switch on when Lydford’s Christmas lights will be turned on and Okehampton’s much-loved Edwardian Evening which was cancelled last year due to covid.

In fact, the group have another Okehampton event. At the end of November, they have an afternoon performance planned at Okehampton’s Charter Hall with their accompanying band, the Band of Bees as Gemma says they like to call them.’We have the birds and the bees,’ she said.

The event will be laid out in a theatre-style with a dance floor and tea and cake will also be available.

’The whole performance is going to be in the style of the 1920-50s with a sprinkle of modern vintage.,’ said Gemma.’And it’s just brilliant to be getting out again. 'Music is just such a therapy for performers and the audience though some people are still cautious,’ she added

Despite the ongoing pandemic, The Hummingbirds remain ever-popular in the area, with some of their shows already sold out.

Since covid, publicity seems to be especially important and their social media accounts are lively, colourful and appealing.

It’s not just live shows they are working on. The ladies also have just released a new Christmas album called Jingle All The Way and have another one on the way.

The Hummingbirds started performing nearly four years ago after Gemma, with the encouragement of her husband, decided to fulfil a long-standing dream and start a 1940s-style harmony group.

Gemma then approached friend, Morwenna Millership, aka Hummingbird Bettie, who seemed interested in the idea.

The two ladies advertised for a third Hummingbird and Jessica Squire joined the group as Hummingbird Clara.

Gemma said they all chose 1920s-style stage names to fit with the group’s image.

’We chose names that were fashionable in the 1920s.

’The original focus was on 1940s music and we wanted names that would fit with the image of people in their 20s during the 1940s,’ she said.

The group’s name was chosen relatively quickly. Gemma explained that Hummingbirds was the first suggestion and though other names were considered, the three ladies kept coming back to that name.

The harmony group has gone from strength to strength.

Now covid vaccinations are well under way and the restrictions have been removed the Hummingbirds look forward to their performances in Okehampton and Kilkhampton this month.

The Hummingbirds second Okehampton performance will take place at the Charter Hall on Sunday November 21 from 3pm to 5pm.

For more information about The Hummingbirds visit their website at www.thehummingbirdstrio.co.uk