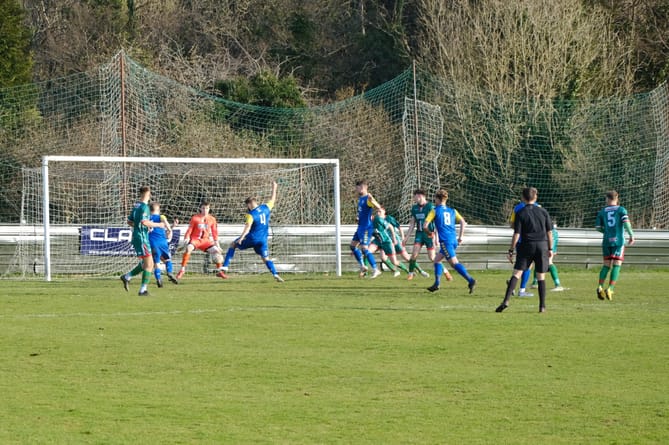 A REALLY strong wind prevented much good football being played at Simmons Park last Saturday with high crosses and long cross-field balls being taken off course by the wind.

Argyle also had to contend with only having one substitute on the bench this week due to holidays, work commitments and suspensions.  In fact, the strength in depth of the squad is being tested as the season moves into its remaining nine games.

Both sides struggled to contend with the wind during the first half. Okehampton put some good moves together but the final ball was often taken off course by the wind. In fact, the best chance of the first half fell to Bovey Tracey on 27 minutes and only a great save by Aaron Dearing stopped them taking the lead.  Half time was reached with the score still 0-0.

The second half saw Okey playing into the wind and they seemed to find this more to their liking and began to make more chances.

Ten minutes after the interval, they were awarded a free-kick and the ball was played into the box where it fell to Ryan Davies to slot home. Four minutes later, a corner was headed down to Harvey Newman who calmly put it past the visiting keeper.

Shortly after, forward Brad Ausden had to go off injured and Okey’s sub Scott Sanders, normally a back four player, had to come on and play in midfield, where he did a good job.

The last 15 minutes belonged to Bovey who put a lot of pressure on the Okes’ defence looking for a way back. Great work by Argyle’s back four of Sam Down, Ryan Davies, Newman and Danny Bell and some good saves by Aaron Dearing kept the visitors out for Argyle to record a 2-0 victory.

The Reserves had a disappointing 4-1 defeat away to Devon and Exeter Premier Division bottom club Ottery St Mary Reserves last Saturday, and next Saturday are away to league leaders Lapford. The Thirds had a good 4-4 home draw with Kenn Valley United in Division Six and this week have no scheduled fixture.