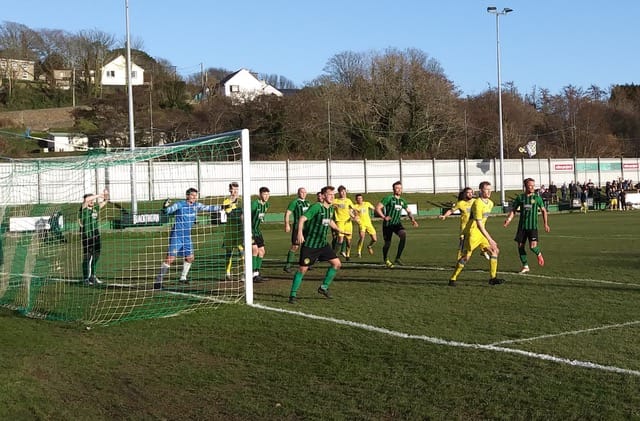 Okehampton were disappointed to go down to West Division side St Blazey last Saturday in a competition that they had high hopes of progressing in.   However, they should not have been too surprised as St Blazey are on a good run of form at present and have lost a similar number of league games as Argyle.  Having said that, the margin of defeat did not reflect how close the game was and it was balanced on a knife edge until the home side scored twice in the last 10 minutes.

Okehampton had the better of the early exchanges but were on the end of some tough tackling and Luke Mortimore in particular was on the end of a series of fouls.  Argyle nearly took the lead after six minutes when Mortimore carried the ball into the box from the right and played it to Ben Bickle whose shot came back off the post.  Shortly after, Bickle was reduced to half pace after being on the receiving end of another foul.  However, St Blazey’s defence played the dangerous Okey attack well and restricted their shots on goal and the home side always looked dangerous on the break against an Argyle defence looking less composed than usual.  St Blazey got the breakthrough on 23 minutes after a fierce shot had been turned away well for a corner by Okey keeper Aaron Dearing.  The Okehampton defence defended the corner badly and St Blazey were able to head the ball back across the box for Liam Eddy to volley home.  The remainder of the first half played out in a competitive end to end encounter with neither side able to break through the opposing defence and despite some good approach work by Argyle the final pass far too often went astray.

Argyle put in a tremendous effort in the second half to try and save the game and penned St Blazey in their own half for the first 40 minutes but the final touch just wasn’t there and the game was settled on 87 minutes when Liam Eddy scored for the home side on a well played fast break out of defence.  Argyle then took off a defender to desperately try to salvage something but were caught out on the break again when Liam Eddy completed his hat-trick during the 10 minutes stoppage time added on by the referee.  To compound Okehampton’s woes, after their outstanding midfielder Luke Reynolds was brought down on the edge of the box, the usually disciplined and composed player threw a punch at the offender and was red-carded.  Argyle were awarded a free kick and the shot struck the hand of a home defender and the referee had no hesitation in awarding a penalty.  To complete a bad day at the office for Okehampton, Brad Ausden’s penalty was well saved by ex Plymouth Argyle keeper Jason Chapman.

To this spectator, men of the match for Okehampton were defender Sam Round and captain Alex Gray, who were on top of their game throughout.  However, it has to be said that the whole team never gave up trying and all worked hard.  To their credit, all of the Okey players and supporters has a good time after the match in the St Blazey clubhouse and enjoyed the excellent hospitality of the home club – it is after all only a game.

Next Saturday, Okehampton are back in League action away to Honiton Town with a 3pm kick-off.

The Reserves put in a strong performance last Saturday away to Lyme Regis finally losing out 3 – 2 to a late goal.  Next Saturday they are back at Simmons Park against high-flying Thorverton, kick-off 3pm while the 3rds are without a match.