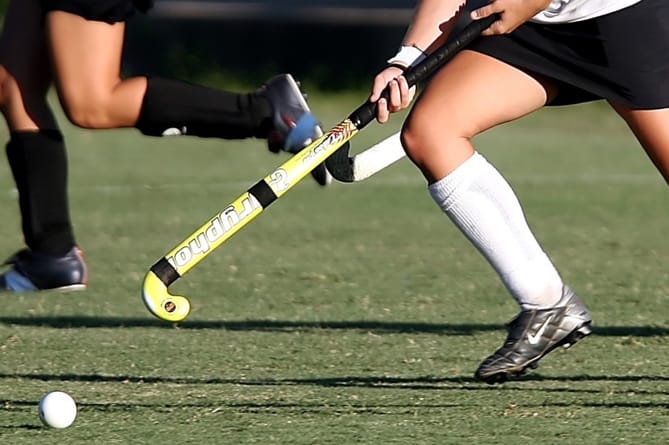 This week, Okehampton men’s hockey team travelled to a bitterly windy Liskeard to play Caradon who were sitting fourth in the league.

The first quarter was very evenly contested as the sides tested each other out, but Oke’s patience was rewarded with a breakthrough goal from a well worked penalty corner routine; a neatly placed pass from Luke Miller allowed Luke Maxa to tap the ball in at the back post.

It wasn’t long after Oke’s lead was doubled following some wonderful link up play between Miller, Nick Luxton and Jake Griffiths ending with Miller tapping the ball in.

Okehampton carried on with their determined attacks with wide runs from Josh Speak causing havoc, resulting in another penalty corner, and a deflection from Luke Liversidge secured their third goal.

The game was looking safe even before the half-time whistle was blown when Luxton grabbed another goal for the visitors.

The second half started and Okehampton continued to dominate the game, as Luxton added another two quick goals.

With no substitutes this week, Oke’s tempo slowed allowing Caradon to attack in earnest, but the Oke back four of Retallick, Liversidge, Hall and Waash stood strong, aided once again by some fine saves from keeper Sam Jones, until a well struck short corner found its way into the bottom corner.

This goal for the home side kicked Oke back into action; another short corner was finished off by Hall, with Miller and Speak scoring a penalty flick apiece taking the Okehampton tally to nine.

This coming Saturday, the team face second placed North Devon, who will no doubt prove a sterner test. The game will start at 12.15pm at the Okehampton College all-weather pitch and supporters will be welcome.