ORCs make a Dark Dart Dash for it 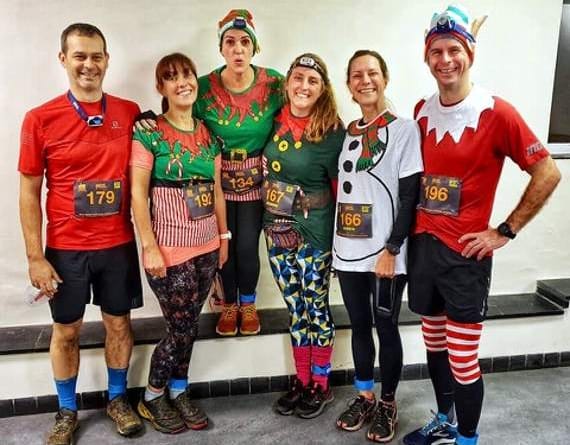 At the Plym Trail Christmas Trail Races on Saturday, Okehampton Running Club had runners in both the half and full marathons.

Starting at Clearbrook near Yelverton, the course is an out and back along the cycle trail, doubled for the marathon. Emma Dean was the first ORC home in the half with a strong run, finishing in 1 hour 50 minutes 50 seconds, followed by Jessica Guscott in 2.00.14. Robert Richards did not have such a good run with a calf niggle slowing him on the return miles and finished in 2.09.58. Roger Voided was the lone club representative in the marathon, finishing fourth in 3.18.33.

Wild Running’s Dark Dart Dash on Saturday evening made Christmas feel that bit closer with its festive dress code. This trail race loops around the grounds of Dartington Hall, providing 1k, 2k, 5k, and 10k routes with mud in plentiful supply. ORC was represented in the 2k, 5k and 10k races with junior members Aiden and Kiera Spinney in the 2k race, where Kiera came third in her age category in 11.29 with her brother fourth in his category in 10.44. In the 5k Phil Turner finished in 43.55, while Karen Vallance took second in her age category, finishing with her daughter Jasmine and Ali Holiday in 48.02.

Jeremy Tandy was the first ORC home in the 10k, coming second overall and first in category in 46.33 while Jo Turner was third in her category in 1.05.24. Phil Spinney, dressed as a Ghostbuster, finished in 1.15.20, scooping one of the best fancy dress prizes along with Jeremy dressed as an elf.

The festive running season continued on Sunday at Cardinham Woods near Bodmin with Purple Gecko’s Cardinham Christmas Canter. This provided Jeremy Tandy with another chance to run as an elf, this time coming third in the 10k race in 40.44 over forestry tracks.

Jo Page took to the beach for her race on Sunday, running the Weston Christmas Cracker at Weston-Super-Mare. Dressed as a Christmas tree, Jo battled with the headwind on the exposed beach, finishing first senior lady in 47.38.