ORCs on coast, hills and woods 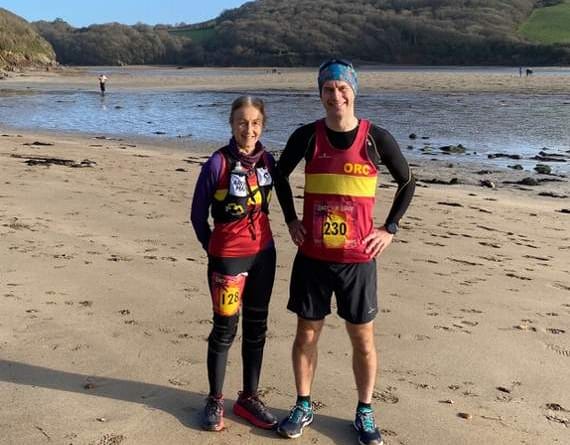 Jane Jackson and Jeremy Tandy ready for the Race the Light at Mothecombe.

JANE Jackson and Jeremy Tandy headed to Mothecombe on the South Devon coast on Saturday to represent Okehampton Running Club in Puretrail’s 8.5-mile trail-race with a difference, Race the Light.

Starting from Mothecombe beach, runners headed straight across the Erme estuary where, with low tide still an hour away, the water came well over the knees. From there the course followed an out and back route of woodland trails with deep mud, never-ending hills and a near vertical scramble. The tide was a little lower for the return crossing followed by an unforgiving uphill to the finish. Jeremy finished fifth in 1 hour 01 minute 58 seconds and Jane in 1.44.21.

Less than 24 hours later Jane was back in action at the Haldon Jingle Bells 10k, joined by fellow ORC Sarah Bell in the 5k race. Both races set off together, with the 10k doing two laps of the 5k course. Fancy dress was almost compulsory so it was quite a sight with 250 santas, elves and reindeer charging off round the forestry tracks. Having raced the day before, Jane was pleased to finish in 1.08.36 round the hilly course, with Sarah finishing the 5k in 41.22.

Westward Ho! was the location on Sunday for the second Westward League Cross Country fixture of December. This is never a popular venue, with its muddy, pancake flat course of straight lines interspersed with mud filled ditches and coastal exposure to all elements. In the U11 category team ORC was represented by Stanley Hicks, Ollie King, Kiera and Aiden Spinney and Amelie and Max Ulyate-Thomas. Amelie arrived too late for the girls U11 race so ran her first Westward League race with the boys.

The ORC ladies’ team fell apart due to winter bugs so, despite Jane Jackson driving to the venue from Haldon in an attempt to make up a team, only Jo Page and Claudine Benstead ran in the senior women’s category. In the senior men’s category Andy Vallance was first home for team ORC followed by Paul Crease, Jeremy Tandy, Ricky Davies, Rob Hicks, Paul Carter, Stuart Page and Ian Page.