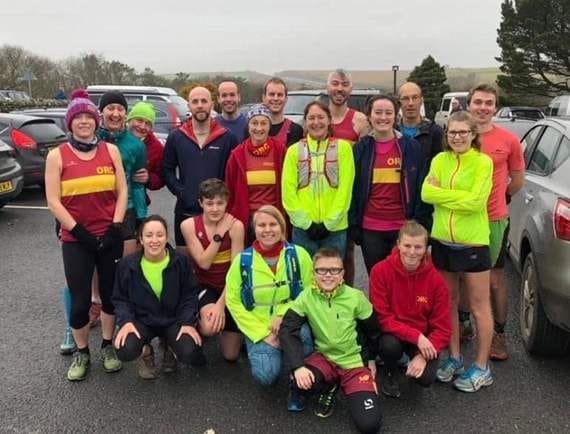 ORCs and friends at the Brown Willy Run on New Year’s Day.

Supposedly not a race but a social run, the kudos of getting to the summit of Brown Willy and back first makes for a fast race at the front. Okehampton’s Jo Page was second lady last year and went one better to be first lady home this year.

Sunday saw a new race on the calendar, the New Year’s Five Miler, a flat and fast three lap route around Exeter’s Riverside playing field where cool and calm conditions made for some great times.

Four ORCs ran, all finishing in the top three of their age categories and three setting new club records. Steve Sincock was the first home in 30 minutes 58 seconds to be first male veteran 55 (a new club record), followed by Claudine Benstead whose time of 34.14 gave her first place in FV60 category and set a benchmark record for club FV60s. Paul Evison came third in the MV65s in a time of 36.49, while Jane Richardson set a new personal best and beat her own FV70 record with a time of 48.03.

Christmas visits away provided ORCs with opportunities to run some different races.

Christine Fritsch was up in the Lake District and took on the Wansfell Fell race. This was a typical fell race of one mile up to the top of the fell and then straight back down. It sounds easy enough but the route is extremely steep and rough underfoot and with wet and slippery conditions, Christine ended up on her backside a couple of times on the descent; she still enjoyed herself, finishing in 38 minutes 30 seconds.

Jo Page found a quirky race while staying in Shropshire and ran the Sunrise to Sunset Half Marathon. This was loops round a one kilometre cycle route course and after completing each lap her counting card was stamped.

After having her card stamped for the 21st time, a bell was rung to signal she had finished and Jo was told she was the overall winner, which was a complete surprise to her with a finish time of 1 hour 35 mins 45 secs..