Efficient Okehampton get the job done 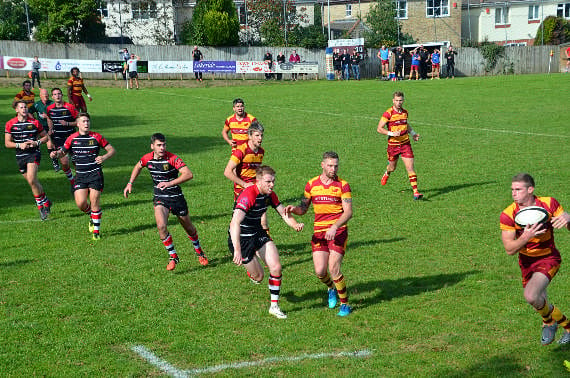 Oke fullback Dan Fogerty is set free on the wing against Lydney on Saturday. Picture by Dave Potter ()

THE Okes never reached the heights of last week’s performance but still had enough to see off first time visitors Lydney on a sunny Saturday at the Showground.

Okehampton kicked off up the slope against unknown foe in a Lydney side that has slid down the leagues in recent seasons but is still a club with huge tradition and ambitions and one the Okes had never faced previously at any level.

Playing conditions were perfect and the initial sorties indicated an even contest as Lydney looked to use their sizeable pack whilst the Okes looked to up the tempo with quick taps and wide passes.

The Okes fashioned a couple of early chances but both went unrewarded. A harsh forward pass halted one clean break and then full back Dan Fogarty was bundled into touch a yard out to prevent a score. Oke looked likely to break the deadlock as they looked dangerous out wide and after 15 minutes the pressure finally told and it was Gareth Espin, playing at outside centre who struck first. Great continuity and a break up the right flank saw the hosts get in behind the Lydney defence, and as the ball was shipped from the breakdown Espin cut a sharp line against the grain to power over for a five pointer which was well converted by Jack Akery.

It was not long before the visitors struck back though, as they took full advantage of some Oke indiscipline, profiting from a quick tap and go which eventually resulted in the visitors’ left winger crossing wide out. The conversion was wide.

The Okes soon reasserted themselves but were regularly thwarted by their malfunctioning lineout. The scrum however was another story altogether and on the half hour a set piece was the catalyst for the host’s second try.

A defensive Lydney scrum was shoved back at a rate of knots and scrum half Richie Friend pounced to cross for a five pointer to the right of the uprights. Akery, who had a unlucky afternoon with the boot, saw his conversion attempt bounce back off the uprights.

At 12-5 and up the slope, Okes would have been reasonably pleased with the scoreline, if not entirely with the display so far. However, as is oft the case, Okes propensity to switch off near the interval reared its ugly head once more. A kick behind and an attacking lineout from the Forest Of Dean based visitors saw them gain an attacking scrum close in. Okes’ defence stood firm initially but after several attacks were repelled, the visitor’s centre eventually forced his way over just before the break. The conversion was missed again but the Okes now only held a narrow two point lead. There was still time for the Okes to force another penalty before the changeover, but Akery was again unfortunate to strike yet another upright to leave it 12-10 at half time.

The second 40 was soon underway and Oke’s profligacy allowed the visitors to respond, move upfield and impose some pressure on the defence. A clearing kick ahead brought forth a Lydney knock on and another good attacking position for the hosts. An Oke scrum was the result and the maroon and amber pack didn’t disappoint, as after an initial reset they drove the visitors back over their own line, allowing number eight  Tom McGrattan to dive over for his brace. Akery landed the extras — the conversion was apparently later ruled out, although no-one was quite sure why!

The Okes remained mainly in control at 17-10 and with just over 15 minutes left they sealed the five points with their fourth and final try.

Another attacking scrum led to the ball going out wide through the hands allowing winger Kieran Lee to slide over in the bottom right hand corner. Akery saw his misfortune continue as his well struck conversion bounced off the top of the uprights this time.

The visitors were not finished yet though, and they pummelled away at the Okes resilient over the next ten minutes looking for a losing bonus point. During this period on the back foot the Okes also lost replacement winger Ryan Lee to the bin.  In what little time remained there were no further nervous moments for the hosts and when the whistle finally below another valuable five point win had been gained.

In summary, not a classic, but it was always going to be impossible to follow up last weeks’ effort in similar style.

The Okes, who remain unbeaten, were efficient without ever fully hitting their straps, whilst the opposition provided stubborn resistance.