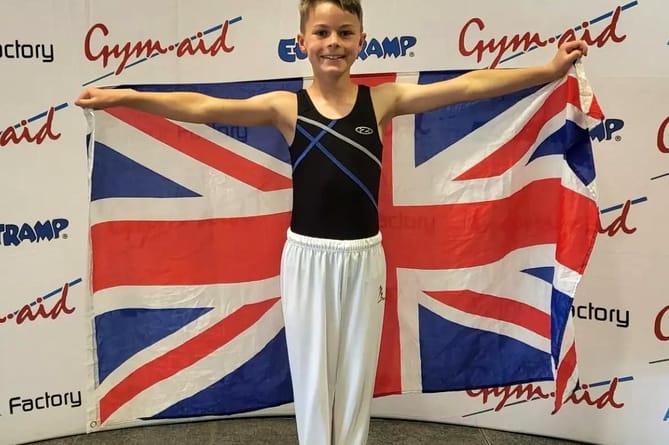 ABOVE: Mason Parker-Groves after his sixth place at the national Spring Cup and below, during his routine.

The national Spring Cup events are the highest level of British Gymnastics (BG) competition. Mason has progressed quickly with his routine difficulty to skip BG regional level and go straight to national level.

At BG national trampoline competitions, gymnasts need to perform a compulsory set routine and a voluntary routine in front of a panel of judges.

Gymnasts need to meet a minimum difficulty requirement for the voluntary routine to be able to compete. They are judged on technical skill, routine height, travel and routine difficulty.

Mason performed two stylish routines in the qualifying round and achieving good execution, HD (travel) and time of flight scores. After the first round, Mason qualified for the final in fourth position. In the final, he performed another confident routine to come sixth overall. He is now preparing for an open competition at the University of Bath, and new skills for Spring Cup next year.

Mason’s coach, Vicki Pritchard, said: ‘Mason has worked hard to increase his skill difficulty for the event. It takes a huge amount of dedication and commitment to reach BG national level and he did extremely well to perform such solid routines on the day in such a large venue.’

The club has a number of other gymnasts who are progressing quickly with their skill difficulty to compete at the Spring Cup and English events next season.

Okehampton Flyers is running trials for its junior squads for 5-to-8-year-olds. If your children spend most of their free time cartwheeling around the house or bouncing on their garden trampoline, then trampolining, DMT or tumbling might be for them! Contact Vicki at [email protected] for more information. For more details about the club, visit okehamptonflyers.org.uk or follow the club on Facebook and Instagram @okehamptonflyers.