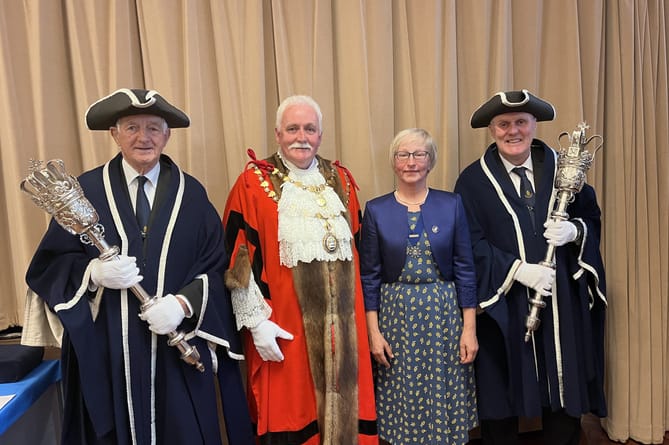 Okehampton Town Councillor Bob Tolley said he was ‘most flattered and honoured’ by councillor’s support as he was re-elected as Okehampton’s mayor last Wednesday (May 11).

Councillors voted to elect Cllr Tolley for a second mayoral year at the Mayor Choosing at which the Mayor’s Cadet and committee chairmen for the upcoming year were also announced.

Cllr Tolley said: ‘I thank the council for their support and hopefully not misplaced judgement in re-electing me to this prestigious post. I’m most flattered and honoured by their support.

‘I hope this year’s team, new committee chairmen and deputies, supported by our more experienced staff will be a recipe to propel the town into the future and in turn encourage young, intelligent members of our community to join a progressive and forward looking council.

‘ I will do my very best to uphold the position of mayor to the best of my ability and, with the help and support to my council colleagues, will move the town forward on to bigger and better things.’

Cllr Tolley will continue to support Dream-A-Way, which provides adults and children with a disability or life-limiting condition with their dream getaway, as his chosen charity this year.

He also added that he is already planning more adventurous tasks as part of his ‘Challenge the Mayor’ initiative.

So far, he is debating a railway-themed escape challenge whereby he would ‘escape’ from the town by train to see how far away he could get in 24 hours.

Alongside the election of the new mayor, the council awarded active members in the community in recognition of the work they had done for Okehampton.

Recipients included Trustee of the Okement River Improvement Group Bill Hennessey and his wife for their environmental work and Okehampton Primary School PTFA chairperson, Chrissie Read, for her work with Okehampton’s children and young people.

Mrs Read said: ‘The award was unexpected. When the letter came through my letterbox I was like “oh my goodness.” It’s nice to be recognised for all the work you enjoy.’

As mayor Cllr Tolley will be expected to attend all council and committee meetings.