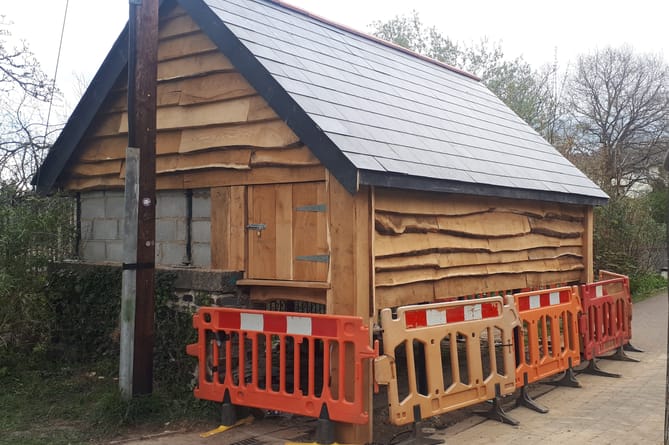 TRUSTEES of an Okehampton charity are in despair after West Devon Borough Council refused permission to knock down dangerous buildings on the ‘eyesore’ Old Mill site.

This was despite the Okehampton Skills and Sports Trust building a bat house described by one trustee as ‘like an airbnb’ to rehouse bats in the derelict Victorian buildings.

The borough council’s development management and licensing committee on Tuesday went against planning officers’ recommendation to the charitable trust to demolish them.

The committee are asking for ‘an alternative scheme’ for redeveloping the site to be brought forward. Local hotel proprietor Simon Essex, who owns the site, said he was at the end of his tether after more than 10 years trying to redevelop it for community benefit. ’It’s horrendous,’ he commented.

‘I would like to know what the alternative scheme is as I have put in two schemes to West Devon Borough Council since 2018 and they have not been deemed satisfactory,’ he said. ‘I’m going to have to go to appeal on this.’

The trust, set up by Mr Essex, has been trying to develop the site for over a decade, with a community purpose in mind.

Previous schemes have included a community centre with training facilities for Okehampton College, which did not materialise.

More recently the trust was proposing a small housing development on the site of the current buildings.

The intention is to plough the money from selling these back into the trust to fund other schemes in the community, like the A30 BC that the trust has just opened next to a site earmarked for the new Parkway station.

Fellow Okehampton Skills and Sports Trust trustee Christine Marsh described the borough council’s refusal for the Old Mill Site as a bitter blow, coming after the trust had built deluxe accommodation for the bats.

Constructed over the past week, the bat home includes a slate roof and substantial timber-lapped walls.

This was intended to satisfy planning conditions which require the bats, a protected species, to be rehoused before the redundant buildings can be knocked down.

‘It is not any old bat house,’ said Mrs Marsh. ‘It looks like an airbnb. It is unbelievable. It has got a slate roof. We have built it because bats are protected species and they needed somewhere to go. We were advised that if we did that the officers would not go against the application.

I’m just disappointed that yet again we are putting off doing something about a dangerous situation. The officers recommended approval. This has been going round and round in circles and the councillors don’t understand the full picture of it.’

The footpath beside the old buildings, going past the bat house and over the bridge is currently closed as a safety precaution, as there are concerns about he instability of the end gable of the building. The officers’ report to the borough council said that it was generally recognised that the site was unsafe.

Mr Essex said: ‘We have had children break into the site left, right and centre and it is just so dangerous. The floors are rotten and the roof is rotten. Building surveyors said as far back as 2010 that it is dangerous.’

Planning permission to first knock down all the site buildings except the Grade II listed chimney was delayed last July after a request for a new survey of bats. A fresh survey was requested, as previous conservation surveys had expired.

Mr Essex had first suggested the bats might be rehoused somewhere in nearby Simmons Park. However, the trust agreed to psh the boat out  with the timber-clad bat home, built to high standards, right beside the Old Mill Site.  The structure has been constructed and now nearly ready for its new occupants.