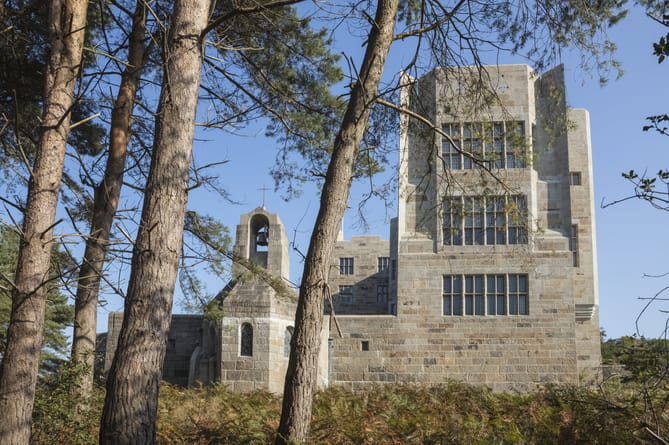 FOLLOWING an epic nine-year conservation project, the National Trust’s ambitious project to save the imposing Castle Drogo has been declared complete.

Castle Drogo, on the edge of Dartmoor at Drewsteignton, has the distinction of being the last castle ever to have been built in Britain.

The work of renowned architect Edwin Lutyens, it was built between 1911 and 1931 for Julius Drewe, a food retailing magnate.

It was his dream to create an imposing ancestral home on a granite outcrop overlooking Dartmoor which would look like it had been there for hundreds of years.

However, somewhat ironically, the castle suffered major structural problems ever since its competiton, which resulted in serious leaks and water penetration throughout the building.

In 2011, the National Trust launched a successful fundraising appeal to secure its future and work to repair the massive flat roof structure, using cutting-edge materials to make it permanently watertight, started in 2013. The repair of the castle presented a major challenge which cost a total of £15.5 million and took almost nine years.

In order to install the new roof system, over 3,000 granite books weighing anything up to 1.4 tonnes have been removed and put back in place and 913 windows containing over 13,000 panes have been refurbished to stop them leaking. Meanwhile, over 60,000 metres of pointing have been replaced.

The National Trust said the repairs would not have been possible without the massive support of the public and individual donors who raised over £800,000, alongside funding from The National Lottery Heritage Fund, Interreg, the Department of Culture, Media and Sport through the Culture Recovery Fund, and others.

National Trust project manager Tim Cambourne said: ‘The distinctive nature of the original construction and design at Castle Drogo required a unique solution to deal with the fabric issues.

‘We have now installed a high-tech roof system over an area roughly equivalent to two football pitches.

‘A new two-layer membrane, designed to cope with the extremes of weather experienced on Dartmoor, now works alongside newly designed roof gullies to accommodate the heavy Dartmoor rainfall, protecting the castle from water damage.

‘This, alongside work that’s taken place to repoint the entire building and refurbish all 913 windows, represents conservation work on a monumental scale.’

During a conservation project of such enormous scale and complexity, there have been plenty of surprises thrown at the project team who have had to overcome a variety of construction related issues and the very special kind of weather only experienced in a location as high and exposed as Castle Drogo.

Indoors, the house and conservation team have completed the mammoth task of cleaning, putting carpets and blinds back and, most importantly, uncovering the collection to return the castle to a family home and bring to life the Lutyens-designed masterpiece, as well as the lives of the Drewe family who it was created for.’