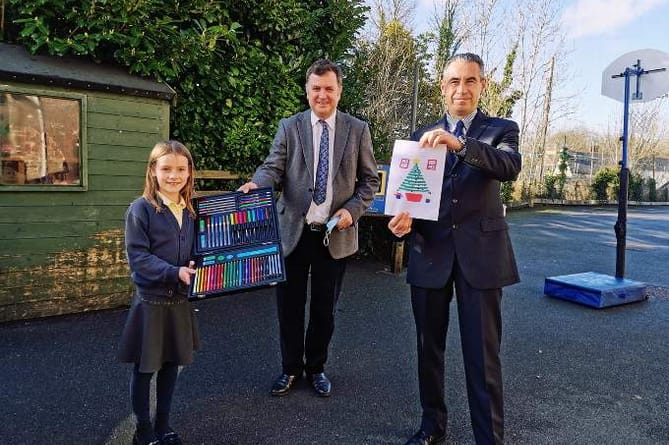 HATHERLEIGH Primary School pupil Chloe Rice, aged seven, has been presented with a prize by local MP Mel Stride for winning the competition to design his 2021 Christmas card.

The Member of Parliament, who sends more than a thousand Christmas cards each year to family, friends, colleagues and local organisations he has visited during the previous 12 months, visited the school to present Chloe with a box of art supplies.

The competition for 2021 was open to the 43 primary schools in Mel’s Central Devon constituency and sponsored by Crediton Coffee Company.

During his visit Mel joined Year 6 pupils for one of their lessons, answering questions about his role as an MP.

He also caught up with headteacher Alan Monger, discussing the continuing impact of Covid-19 on education in Devon.

Mel’s visit to Hatherleigh Primary School was his fourth as an MP, with his last visit being in May 2021.

Mr Monger said: ’It was great Mel was able to visit us again and to talk to some of our Year 6 pupils about Parliament, politics and his role as an MP.

’They have learned about elections and the principles of democracy and I hope that getting to meet Mel will have helped make a topic, which can sometimes be difficult to grasp at a young age, more relatable. Seeing Chloe receive her prize from Mel was also very special.’

’It was lovely to meet her and to join Year 6 for a discussion about Parliament and our democracy.’

To save paper, Mel’s cards were sent electronically with the designs by Chloe, Zak and Arthur all featuring on the card. The drawings can be seen at www.melstridemp.com/xmascard2021