Hop aboard the 118 for town and village connection to rail 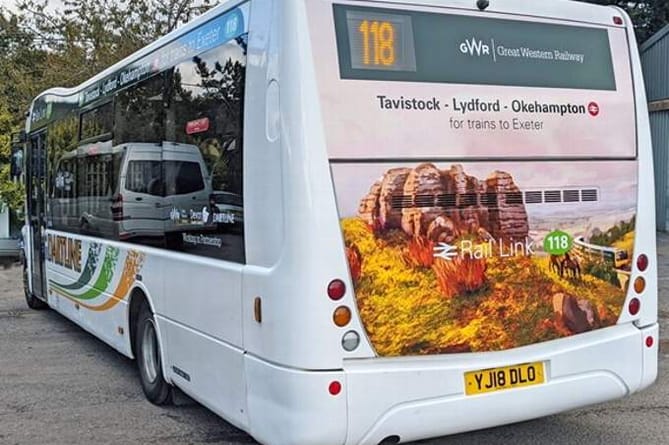 COUNTY council chiefs have confirmed they have launched a new bus service to link residents in Tavistock to Okehampton’s restored railway line.

From Saturday, Service 118 will link Tavistock to Okehampton, via Mary Tavy and Lydford, to provide an integrated connection to the rail services between Okehampton and Exeter during the day. The service is part of a bigger project to improve public transport in Devon.

The move comes as Devon County Council pushes ahead with plans to get trains rolling again in Tavistock — but in the opposite direction.

The council has been given £50,000 in Government funding to prepare a business case for the reopening of the Tavistock to Plymouth section of the line, via Bere Alston, which is still connected to the rail network.

As the 118 runs hourly and the rail service approximately every two hours, buses which operate in between the rail service times won’t serve the station, but instead will stop nearby in West Street and Fore Street in Okehampton.

The only rail services which will not have a connection with the bus service will be the evening journeys, due to the 118 finishing around 6pm. The last bus journey from Okehampton Rail Station leaves at 1755.

A maximum fare of £3, single or return, is being introduced for passengers on the 118 who have a valid rail ticket. There will also be a flat fare of £1 for those travelling from Okehampton town to the rail station. The new service is operated by Dartline and fully funded by Devon County Council.

Cllr Andrea Davis, Cabinet member for climate change, environment and transport, said: ‘We wanted to ensure that there was an integrated bus service to coincide with the re-introduction of the Okehampton rail services and the county council is demonstrating its commitment to public transport by funding 100 per cent of the new 118 bus service.

‘Hopefully it will encourage and enable even more people to take advantage of the new rail connection between Okehampton and Exeter. This new service is also in line with our ambitious Bus Service Improvement Plan, which puts public transport, and greater integration between bus and rail services, at the heart of our future transport network in Devon as we strive to reduce the county’s carbon emissions.’

From December 12, there will be a minor change to both the rail and bus timetables on Saturdays and a new Sunday and public holiday service will be introduced. One journey on the latter will continue through to Gunnislake to make a connection with the Tamar Valley line.

The £3 maximum fare for rail travellers will also apply on Sundays, including those travelling to and from Gunnislake.

Okehampton county councillor Lois Samuel described the restoration of the regular passenger rail service to Exeter as a ‘watershed moment for Okehampton, one which will breathe new life into our town and help improve access to jobs and education, particularly for young people.

‘I am working with our MP Mel Stride and local borough councillors to secure funding for a new station on the eastern edge of town which I believe is essential to maximise the benefits of the new service and resolve some of the unintended negative consequences such as increased congestion around Station Road.’