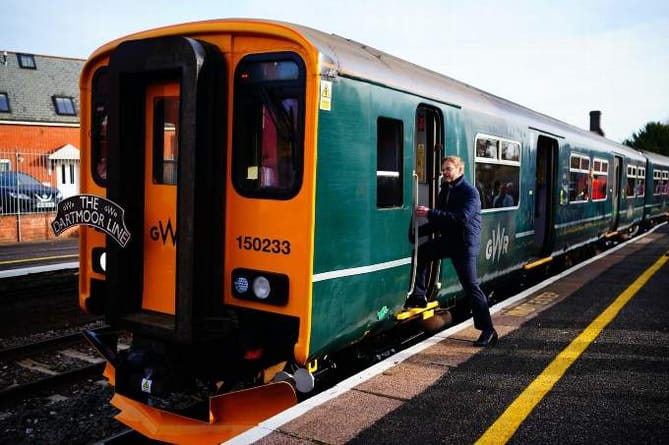 Secretary of State for Transport Grant Shapps boards the first train on the Dartmoor Line at Okehampton Station.

Transport Secretary Grant Shapps visited Okehampton this morning to dispatch the first passenger train to run on the Dartmoor Line for over 50 years.

After the minister had done the honours, the train was due to leave for Exeter carrying local schoolchildren, campaigners, railway staff and supporters who helped make the project happen. The regular passenger service starts on Saturday.

Mr Shapps met Tom and Sue Baxter of the Dartmoor Railway Association, key supporters of the reinstatement of the passenger service. He also had his photo taken with the Network Rail team who got the line ready in just nine months.

Mr Shapps said: ’By restoring the Dartmoor Line we are undoing 50 years of damage, reconnecting a community and creating new opportunities for jobs, tourism, education and recreation.

’We have made it our mission to reverse cuts made in the Beeching era of the 1960s. The passion, nostalgia and enthusiasm for that ambition is clear right across the country. People love their railways, and rightly miss them when they’re gone. Today – ahead of time, and under budget – we’ve made a decisive step in fixing that, cutting the ribbon on a line and making a real difference to people’s lives.’

The Department for Transport, Network Rail and Great Western Railway (GWR) have worked together to reopen the line linking Okehampton and Exeter – shut to regular passengers since 1972 – ahead of time and under budget. It has taken Network Rail just nine months to get the railway ready, relaying 11 miles of track between Okehampton and Coleford Junction near Crediton. The project saw over £40 million of Government investment through the Restoring Your Railway programme to reverse the Beeching cuts of the 1960s. A service will run every two hours, with plans to expand to an hourly service in 2022.

This will benefit students heading to colleges in Exeter as well as tourists travelling towards Dartmoor, easing congestion on local roads and giving a much-needed boost to the local economy.