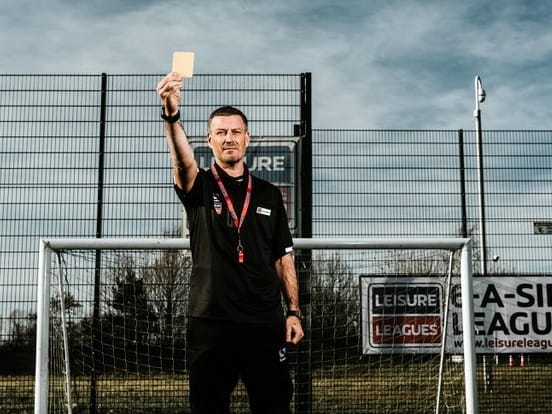 Former Premier League, FA Cup Final and Champions League Final referee Mark Clattenburg has given his backing to a Okehampton community six-a-side football league which is set to kick off this month.

The Monday league at Ashbury Hotel is set to become a real staple of sporting life in the town, as hundreds of players in the area look to start playing again, after months and months of inactivity due to covid restrictions which has damaged physical and mental health.

Matches are to kick off this month and the world’s most famous referee is lending his support, saying: ‘I am delighted to be a part of the Leisure Leagues family, and help their leagues both in the UK, throughout the world, and at the extraordinary international tournaments which they organise on a world level.’

Now its all systems go and there are just a few spaces left for new teams, but area manager Aaron Cooper was delighted to be kicking off, adding: ‘We are looking forward to getting everyone moving again.’

Teams have been flooding in, eager to get on the pitch and will be competing for big prizes, too. The newly revamped Leisure Leagues Prize Draw has already seen thousands of pounds of prizes given away, ranging from city breaks to Adidas Football Boots and Wembley Tours.

In addition, Leisure Leagues are the only registered not for profit provider of football, and they have a record of donating to good causes and charities across the country, with Aaron adding: ‘We are proud to be different, and players across the area already understand this.’

To claim one of the last few spaces, click here: https://www.leisureleagues.net/league/ashbury-hotel/okehampton-monday