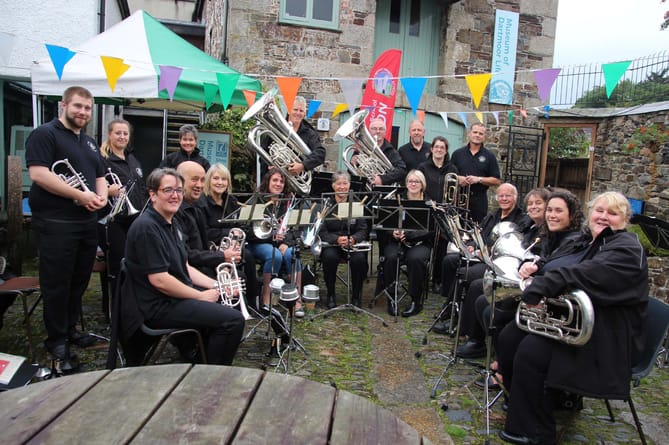 Okehampton Excelsior Silver Band, pictured performing in the museum courtyard, have been targeted by vandals.

An Okehampton Town Councillor has called for more bobbies on the beat as the town reels from another vandalism incident this time targeting the town’s silver band.

Councillor Jan Goffey has said that a greater police presence in Okehampton is needed to stop the ongoing vandalism problems in the town.

Cllr Goffey said: ‘We need more police on the beat. You can’t prevent crime driving around in cars. With police on the streets I think we would see a big improvement and these kids would actually see the consequences of their actions.’

Her comments come following the latest incident of vandalism when a group of youngsters entered the Okehampton Excelsior Silver Band’s offices and caused major disruption. The town council are now reviewing the building’s security arrangements.

Band member Laura Leahy said: ‘Unfortunately during one of our practices we noticed some teens playing on the roof through the windows which of course was a worry. Shortly after they had moved around to the front of the barroom and proceed to kick the door on several occasions, members of the band soon asked them to leave which they reluctantly did however they soon returned and caused trouble in the toilet, emptying soap and toilet paper and kicking the door to the practice room again.

‘They did return the following week whilst we were practicing, again kicking the door. Obviously this is causing concern to the safety of the band members and resulting in real disruption. We are now having to lock the band room door once all members have arrived which is really not ideal but unavoidable at the moment.’

The attack follows another recent vandalism incident in Simmons Park which saw picnic benches overturned and the book swap destroyed.

Okehampton Town Council strongly condemned the act in which two newly-acquired picnic benches were ripped from their fixings and overturned.

The book swap in the phone box was also destroyed when the books and shelves were removed and thrown into the river or burnt.

The council, which reported being disappointed and upset at the damage, are now looking to repair it or buy replacement items.

Nearly two years, the zip wire in Simmons Park was also vandalised and was only officially reopened two weeks ago as part of the Queen’s Platinum Jubilee celebrations.

Matt Hawke, the neighbourhood beat manager in Okehampton, said: ‘Regarding the recent vandalism in the park we are actively investigating that incident as the CCTV has captured it. Regarding any reports of vandalism we try to increase patrols in those areas when staffing levels allow. Both response and the neighbourhood team will work together to provide a police presence.

‘What I normally advise people is that they need to report it to us. The more reports we get the better, if we don’t know about it then we can’t begin to tackle the problems.

‘We work closely with West Devon Council and the schools to try and tackle youth offending/ASB.’