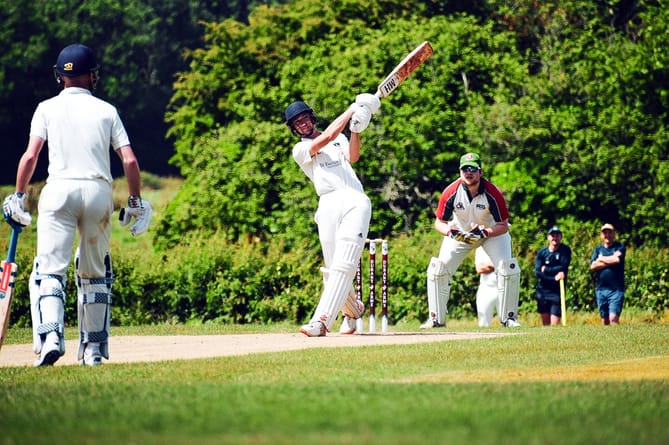 DOUBLE TON: Bridestowe’s Leon Horn on his way to 200. Picture by Katie Jecks.

Bridestowe picked up their third win on the bounce with a convincing 219-run victory at Dartington and Totnes.

The visitors racked up 406-6 from their 45 overs with Leon Horn scoring his first DCL double-hundred.

The game-changing partnership came between Tallan Burns (67) and Horn, who put on 252 for the fourth wicket.

It was a record-breaking stand that shattered the previous divisional high of 205 set by Thorverton batters David Baldock and Paul Fielder against Shobrooke Park in 2013.

Bridestowe also set a new team total high for the division that surpassed the 400 for five Plymstock made against South Devon in 2016.

And Horn is now the joint highest scorer in the B Division with Marco Marais, who made 200 not out for Lewdown against Alphington in 2013.

‘Their opening bowling partnership was quite dangerous with the pitch doing all sorts, which Leon and Kian negotiated very well,’ said Bridestowe captain Dan Fogerty.

‘After about the 10th over it got a bit friendlier and with Leon’s ability it was just a field day out for him.’

To compound the misery for D&T, 30 penalty runs were added for slow over rate, bringing the total to chase over the 400-mark.

Despite a workmanlike 72 from Dinesh Raheja and 36 from Chris Cook, D&T could only get to 186 for eight in reply.

Callum Mallett (3-29) and Ryan Dennis (2-26) were the main wicket takers for Bridestowe.

Captain Fogerty gave nine bowlers a go to try to prise out the final two wickets.

‘Bowling was difficult to get up for when they never stood and chance but we’ll take 19 points,’ he said.

Bridestowe face Ivybridge at Millaton this Saturday when batting all-rounder Craig Penberthy is poised to make his debut following his transfer from Premier side Bradninch.

Fogerty said he was pleased to have Penberthy on board.

‘Craig is a good player who has had a tough start to the season, but we know what he’s capable of when he gets going and playing confidently which I’m sure he’ll be doing quickly.

‘He’s a fairly local lad and has played with the majority of the lads already so won’t have any problems fitting in. I am expecting him to hit the ground running.’