Excellent win for Okes over University 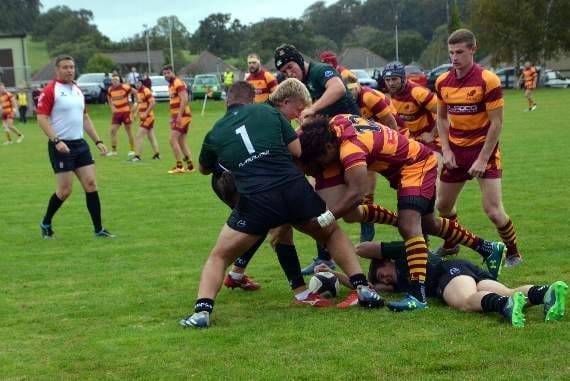 THIS was a superb, all round effort from The Okes, who comprehensively beat a highly rated Exeter University side hotly tipped for promotion.

Okehampton are already finding their feet at level five and the hosts started strongly and for once not conceding during the first few minutes.

The home side were against the incline in the first half and were immediately competitive and fierce in the tackle. Both sides created openings but it was the visitors who gained the first scoring chance with a kickable penalty award. They opted to punt to the corner but the Okes successfully repelled the lineout as the first 15 minutes drew to a close. Oke continued to probe whenever they were in possession but on the attack just outside the University 22 in the 18th minute the visitors rushed defence forced a risky pass and it was gratefully intercepted by their winger Davies, who raced home untouched for a score that was against the run of play.

In the second quarter the Okes’ pressure forced the visitors to infringe. The tap penalty was taken quickly by the Okes and shipped left to fly half Dan Fogarty who scooted over the line for the Okes’ first try, leaving it 7-5 after the conversion drifted wide.

The bulky University pack soon responded and the visitors were in the ascendancy during the next period. They missed a kickable penalty before striking for their second try in the 25th minute. A rare Okes’ missed tackle in midfield allowed the University number eight to charge towards the Oke uprights, before he offloaded to his inside centre who touched down the move to extend their lead. The score now stood at 14-5 after the simple extras were landed.

Undaunted, the Okes soon retaliated. Bevon Armitage forced yet another turnover to allow the Okes another attacking opportunity. What followed was one of the best passages of play seen at the Showfield in some time. Excellent continuity, handling, clearing out and support lines saw the Okes make steady progress towards the students’ tryline. Phase after phase was martialed effectively until the increasing pressure finally forced a crack in the Uni defence. Oke prop Pat Nash made the final powerful drive across the whitewash, near the uprights, with his teammates in close attendance. The home crowd erupted and the maroon and amber belief was on the rise. Richie Friend landed the extra two and it was now merely a two point ball game with just over five minutes of a breathless first 40 minutes remaining.

The hosts were not done yet though, the visitors were rattled, not having it their own way and forced into errors by an increasingly ferocious home defence. On 37 minutes, under pressure deep in their own 22, the students kicked to clear their lines. The clearance was deftly controlled by Okes winger Ryan Lee who fed skipper Tom McGrattan to his left, just inside the visitor’s half. The Okes captain and number eight, who was to put in an outstanding performance throughout cut a swathe through numerous defenders to cross for a superb score. Friend added the conversion and the sides soon turned around with the Okes full value for their 19-14 lead at the interval.

The weather, which started so promisingly, had now deteriorated into a steady shower. An early Okes penalty attempt was wide, before the hosts extended their lead with a successful three pointer on 53 minutes. Richie Friend again doing the business to take the lead to eight points.

Consecutive penalties allowed the students to pound away at the home tryline. Eventually they were across it and the referee spotted an Oke offence and awarded a penalty try, coupled with a yellow card for Okes’ centre Armitage.

Into the last quarter the home side were down to 14 and all subs had now made an entrance and an impact. The Okes dug in and continued to cause the visitors problems. Finally the dam broke in the 62nd minute and it was apt that it was Liam Sampson, tireless throughout, who plundered the bonus point try, diving over after a close range ruck situation. The conversion was a good one at 29-21.

On 64 minutes Okes forced another penalty which Richie Friend landed. With the time ebbing away the Okes were comfortable. It was Friend who booted it over the bar to end the game to bring down the curtain on an outstanding home effort.

As the players left to well deserved plaudits and praise, club members reflected on these halcyon days. Okes have never plied their trade so high and have acquitted themselves superbly so far.