Crowds expected as Tour of Britain comes to Tavistock, Princetown and Moretonhampstead today 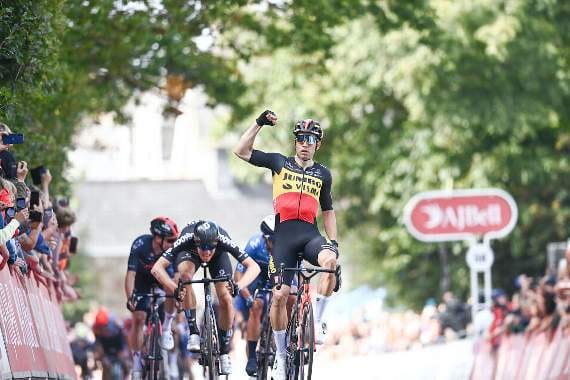 DEVON will host Stage Two of the AJ Tour of Britain today with crowds expected to be cheering on the competitors as they race through Tavistock and over the moors to Princetown and onto Moretonhampstead.

Tavistock is hosting one of three sprints during the Devon stage and riders are due to arrive in Plymouth Road just after 2pm. Spectators are being advised to get into town early so they don’t miss the action.

Rolling road closures are in place and there will be ’no stopping’ on Plymouth Road between 9.30pm and 4pm.

This year’s Devon stage begins at 11am on Hercules Road in Sherford and finishes on Queen’s Street in Exeter around 3.40pm.

Wout van Aert (Team Jumbo – Visma) sprinted to victory in the opening stage of the Tour of Britain from Penzance to Bodmin yesterday.

Speaking after the stage, Wout van Aert said; ‘Being here it was almost overwhelming seeing the amount if crowds at the side of the roads, we have been missing this in the last two years and it’s nice to see people outside again and especially in a crowd together, it’s nice to see people are so crazy about cycling, it makes it more beautiful when we win.

‘It was a tough stage.  It was good for me to adapt to these kind of roads and to get used to them. The stage was controlled and yeah racing, high speeds and obviously on a first day of a race everybody is still fresh so it was a big battle to be at the front for the sprint. My teammates helped me secure a good position and I think I did the right timing in the sprint.’