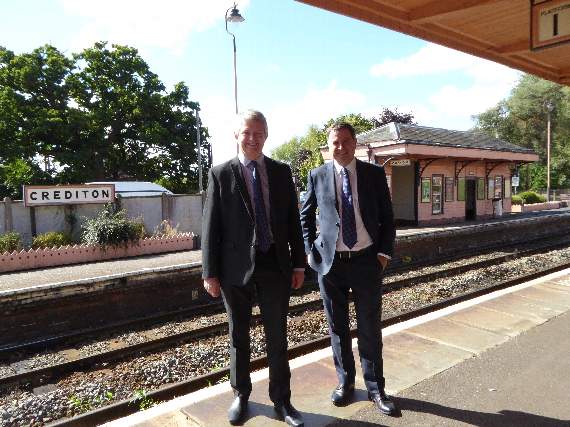 At present there is just one rail route into South Devon, Plymouth and Cornwall which runs south of Exeter through Dawlish, Teignmouth and Newton Abbot. However, Mr Stride has campaigned for several years with residents in Okehampton for a second route that would run west of Exeter, through Crediton and Okehampton and then turn south to Tavistock and Plymouth, mostly on existing track. In 2014 Mr Stride secured visits from the Secretary of State for Transport and Rail Minister to Okehampton to listen first-hand to the benefits of the route and in February this year met with the then Chancellor of the Exchequer to press for government investment.

Mr Stride said: ‘Securing government investment in the line was never going to be easy but the case remains strong and the popularity of this summer’s Rover Service, which began in May and takes passengers between Okehampton and Exeter on Sundays has strengthened the argument for a permanent regular service to return here.’

Cllr Eginton said: ‘Okehampton has a lot to gain from these plans, but there would also be a boost to the local economy here in Crediton and an improvement in air quality for Mid Devon communities like Cheriton Bishop near the A30 as many Okehampton residents will choose to commute to work in Exeter on the train rather than drive.

‘I will stay in close contact with Mel on the issue and will do whatever I can to support the campaign from a Mid Devon perspective.’