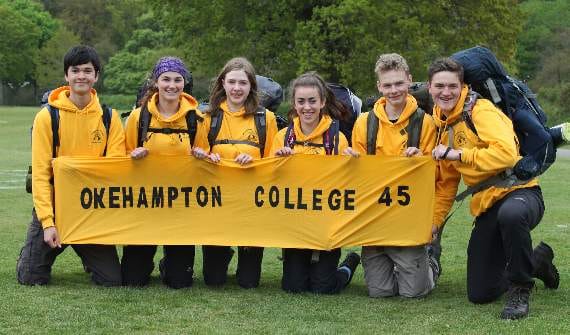 LEADEN skies did nothing to cast a shadow over this year’s Ten Tors and Jubilee challenges, with 2,900 taking part in the event.

The challenge, now in its 57th year, is one of the biggest outdoors adventure events for young people in the UK in which they are tested to their limits by trekking unaided over different 35, 45 or 55 mile routes across Dartmoor, encountering some of the wildest landscapes and highest peaks in Southern England.

They not only have to rely on team work and navigational skills but sheer grit and determination to succeed. There can be no use of mobile phones or GPS and definitely no adult intervention. However safety is at the heart of the event and each team is monitored in a military operations room manned 24 hours by both military and civilian staff via a GPS tracker, which not only gives their location but also enables them to contact the organisers in an emergency.

Colonel James Coote DSO OBE, Commander Headquarters South West and Director Ten Tors said: ‘It has been a year in the planning and it has been a great event this year and we have been able to achieve the aim.

‘This is a joint enterprise with the Navy, Air Force and the Civil Service who have all worked really hard to make this a success in cooperation with emergency services and the wonderful local volunteer agencies.

‘The great benefit to Defence is in that we are training and operating with the emergency responders that we might have to operate with one day if there is a major emergency in the South West.

‘The teams have given superb performances - the participants have been nothing short of inspirational.’

After the start of the main event, up to 300 youngsters with special physical or educational needs started the Jubilee Challenge. The youngsters - many in wheelchairs - enter either as teams or as individuals and complete routes of up to 15 miles; they are each accompanied by an Officer Cadet from Exeter University Officer Training Corps. 2017 marks the 40th (ruby) anniversary of the Challenge and this year, Route 4 was named the ‘Ruby Route’ in honour of Ruby May-Porter.  Ruby from Westfield College near Weymouth, has a rare and incurable neurological disorder and took part in last year’s challenge as part of her ‘Bucket List’.

Lieutenant Colonel David Middleton, Commanding Officer of Exeter University Training Corps and organiser of the Jubilee Challenge said: ‘This year has been very significant in that it is the ruby anniversary of the challenge and we were able to recognise the achievements of one of our outstanding participants, Ruby May-Porter, who competed despite extraordinary difficulties last year and was able to come back and start the event for us this year and we have named a route in her honour.

‘The event went really well, we were lucky with the weather. With the moor being so dry, the teams were able to move really quickly and we were surprised at how fast the first teams came in. Everyone seems very happy and all the teams finished safely.’

The majority of the teams who enter Ten Tors are from schools and youth groups from across the South West.

Pictures by James Bird. For individual shots of all four Okehampton College teams and more photos, see this Thursday's edition of the Okehampton Times.