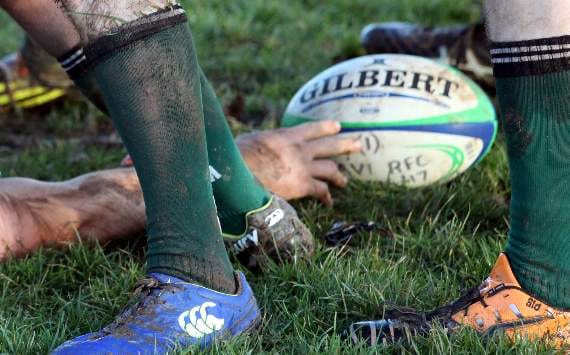 OKEHAMPTON secured only their second away win of the season and one that sees them rise to fourth place in the table after this superb victory borne of ferocious defence and pace in attack.

Moved to the 3G pitch at the University, Okes’ travelling fans were forced to watch the action unfold through a mesh fence. On a windy afternoon, the Oke side played into the breeze first up with the early exchanges fast and furious. The defensive hits and ball carrying were ferocious and both sides played with pace and width to make a highly entertaining match. The students found Oke hard to break down, despite having the better of possession and territory during the first quarter; however, they managed two well struck penalties to earn an early six point advantage.The visitors were undaunted by the initial deficit with the Francis brothers putting in their trademark hits and and skipper McGrattan carrying forcefully from the row they entered the home half with increasing regularity.

On 24 minutes an initial catch and drive lineout was rebuffed but the Okes perservered and it was prop Tom White who powered his way over for the visitors’ first try. Richie Friend added the conversion and it was the Okes who now held a narrow 7-6 lead.

The contest was now opening up with the action end to end at the half hour point. A penalty award on halfway allowed Oke scrum half Joey Bruce a quick tap and go — supporting his sortie was Richie Friend who took play deep into the University 22; Pat Nash, in support, quickly recycled ball into the hands of centre Bevon Armitage who timed the last pass to perfection to put winger Ryan Lee over for a stunning score. Friend converted and the visitors now sat on a useful eight point advantage.

The action continued unabated as the half flew by. It was then the hosts turn to apply pressure and they earned another kickable penalty as Armitage saw yellow for a deliberate knock-on in midfield. Once again it sailed over and the margin was now at five points with four minutes of then first period remaining.

A home scrum was wheeled in the hosts’ half and Joey Bruce was ever alert as he spoilt the scum half’s ball and pinched it for good measure. As the ball reached the Okes’ midfield, Liam Sampson took it up on an arc at pace and after breaking the first tackle found himself with a clear run in between the uprights for Okes’ third score of an excellent first half.

Friend added the extras and Oke found themselves 21-9 up at the interval and in the box seat, wary however as the students would no doubt come out with intent during the second forty.

The Okes now had the wind in their favour and came out strongly despite still being temporarily down to 14 men.

The visitors missed a penalty chance to extend their lead and the next 20 minutes saw the Okes increasingly fall foul of the referee, as penalties abounded causing increasing pressure on the Okes’ defence shape.

Finally the Okes’ defensive efforts reaped deserved rewards as they took their chance to secure a bonus point in this enthralling encounter.

Replacement Richard Bolt switched play to captain Tom McGrattan who perfectly executed a two on one with Gareth Espin on the left wing to plunder the Okes’ fourth try of an increasingly profitable afternoon. Dan Fogerty struck an excellent conversion from wide out and at 28-9 up with barely twelve minutes remaining,

An Exeter University conversion narrowed the gap to 12 points but the Okes continued to defend the last few minutes in their own determined style and eventuality saw out all threats to secure an excellent five point haul at a notoriously difficult venue.